Nothing is known about Eugene's background. It is implied that he has been a regular at the Los Santos Golf Club for quite a while.

Eugene and his friend Raymond are seen waiting behind Dr. Dre, DJ Pooh and Jimmy Iovine at the 4th hole tee box on the course as Dre repeatedly drives to within a short distance of the flag. After the player and Franklin Clinton arrive and delay the trio even further, he and Raymond both get angry and confront the group, demanding to be allowed to play through while they sort out their meeting, causing Dre to get angry. Raymond threatens to have Dre and his companions blackballed from the club before they get to the 9th tee, as they have connections with the board and owner. Dre tells Franklin to chase the duo down, and teach them a lesson. After a short chase leading to the Del Perro Pier, Franklin instructs the protagonist to beat Eugene with a golf club in order to scare him into backing down. After a few hits, Eugene finally gives in, and tells the duo that he will revoke his own membership at the Golfing Society. 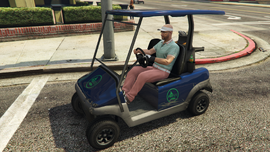