Standard White - 100%
“This isn't some jumped up vintage throwback. This is what would have happened if the classic designers of the 1960s had stayed in production, hemorrhaging money and creativity with every passing decade, until they were reduced to churning out over-marketed nostalgia trips to trust fund hipsters in their second year of college. An instant classic, then.”
— Southern San Andreas Super Autos description.

The Pegassi Esskey is a scrambler featured in Grand Theft Auto Online as part of the Bikers update, released on November 15th, 2016, during the Esskey Week event.

The Esskey is mostly inspired by the Ducati Scrambler, specifically the 2015 model, judging by the size and design.

The Esskey features a compact design, being around the same size as the Enduro. It has a small front mudguard on the fork legs, a circular headlamp with two turn signals beside it and a small rounded fairing above the headlamp. The handlebars are connected to the upper triple clamp by two supports and has two rear-view mirrors near the grips, as well as two pods using the "Sports Bike" dials from motorcycles such as the Akuma and the Bati 801.

The main body uses protective frames over the engine bay area, a large fuel tank and a long seat over the whole rear fender. The engine bay is mostly exposed and features a rounded air filter and two exhaust tubes, which merge into a single tube on the right side.

The rear section features a single red light on the end of the rear fender and a small black frame, which holds the license plate, the turn signals and a rectangular lamp below. A black swingarm connects the rear wheel with the rest of the bike, which bents slightly upwards in a similar way to the Vortex. Two suspension springs can be seen on either side, as well as a large muffler on the right.

The Esskey is a well-performing bike, with tight turning radius and good acceleration. It is also quite manoeuvrable around corners and weaving in and out of traffic. It also sports a good top speed. One of its greatest setbacks, however, is its heavy oversteer, as leaning the bike too much on either side will cause the Esskey to spin out.

The Esskey is powered by a V-Twin engine and is coupled to a 5-speed gearbox. Its engine sound appears to be a lower-pitched variation of the sound used on bikes such as the BF400 and the Manchez.

The "Remove Fairing" modification increases traction in the same way as a spoiler.

* Plates are unavailable if a custom "Rear Mudguard" modification is installed. 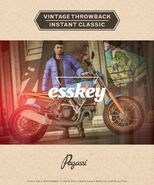 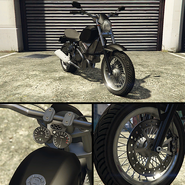 The Esskey on the updated Rockstar Games Social Club.

The Esskey in the cinematic preview on Rockstar Games Social Club.

Esskey logo, used in the advert. 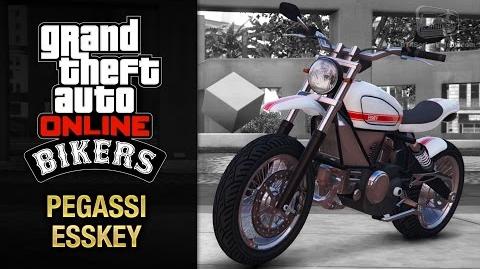