Escuela of the Streets

Escuela Of The Streets

Niko "cleaning up" the dealers.

In-game time
“We gotta get some of these dealers off the streets, man, you know? And I want them to know it was me.”
— Manny Escuela

Escuela of the Streets is the first mission in Grand Theft Auto IV given to the player by Manny Escuela.

In the opening cutscene first, the player sees Manny shooting with his camera man. Mallorie introduces Niko to Manny. Manny tells Niko that he needs Niko's help in "cleaning up" some drug dealers.

After the cutscene ends, Manny tells Niko to get a vehicle and orders him to go to the dealers place. Niko and Manny follow the dealer to the meet. Then Manny will leave Niko there. The door of the building is locked . So, Niko finds some other way to get inside the building. Once inside Niko kills all the drug dealers present there. He then leaves the building and sees Manny recording outside about how Niko cleaned the streets. Niko tells him to stop recording and the mission ends.

After the mission's intro cutscene, the player will end up with Manny, who will instruct them to find a vehicle. Upon obtaining a vehicle, Manny tells Niko that he suspects the dealers are on Grand Boulevard.

Once the player arrives, a brief cutscene will play that shows an accomplice of a group of drug dealers getting into the car and driving off. Naturally, the player will have to follow him. The player must be careful to not get too close to his car, or he will be alarmed. Manny will warn Niko (if not insult him) if the player gets too close. After he warns Niko a certain amount of times, the player will spook the dealer, and he will abort his trip to the meet, therefore failing the mission. If the player beeps the horn while following the dealer, Manny will say something like "Not cool, man!", and if the player continues to beep the horn they will spook the dealer, causing the mission to fail.

The drive will end at the Sprunk warehouse in Chase Point, Bohan. The player must park behind the dealer's car once they get there. After a short cutscene, Manny tells Niko to follow the dealers into the warehouse and then kill them, and then drives away to pick up his cameraman.

The player will quickly find that the front door is locked. At this point, they have several options for getting into the warehouse:

Once inside the warehouse, Niko kills all of the gangsters. When all of the drug dealers have been killed, Niko leaves the warehouse and Manny and his cameraman, will meet him outside. However, if the cops have been alerted, the player will need to lose their wanted level first. 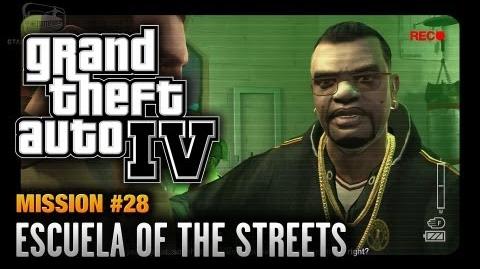