In GTA IV, the company have numerous locations across Algonquin.

In GTA V, the company has a store on Elgin Avenue in Legion Square, Los Santos. The agency advertises and sells Adios Air, Air Emu, Caipira Airways, FlyUS and Herler plane tickets to their customers. The store is not enterable and the business plays no role in the storyline. However, there is a usable ATM next to the main entrance.

The travel agency is located on the ground floor of an unnamed white skyscraper, based on the real life City National Bank building, a 24-story, 348 ft (106 m) building in Downtown Los Angeles. 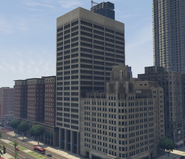 The replica of the City National Bank building.

Escapism Travel on Elgin Avenue.
Add a photo to this gallery
Retrieved from "https://gta.fandom.com/wiki/Escapism_Travel?oldid=1224060"
Community content is available under CC-BY-SA unless otherwise noted.