Rolls Royce
Bentley
“To be quite honest, chaps, I was expecting a little more enthusiasm for the old mode of transportation. It’s the Enus, innit? About as easy getting hold of one of these as it is to piss out a bowling ball.”
— English Dave describing the Enus Stafford

Enus is a British/German luxury motor car manufacturer in the HD Universe of the Grand Theft Auto series.

It is a parody of the ultra-luxury companies Rolls Royce and Bentley. It is stated on Southern San Andreas Super Autos that the company used to be British and is now owned by a German car company, a reference on Volkswagen's ownership of Bentley and BMW's ownership of Rolls-Royce.

Enus‘ vehicles also tend to lack any aftermarket body options, with only a select few of their models offering any visual customizations. 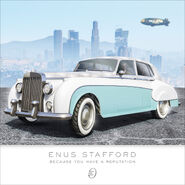 Advertisement for the Stafford.