Standard White - 100%
“Sure, it makes sense for a nation of ultra liberal herring-lovers to lead the world in the manufacture of affordable flat-pack furniture. But just when you think you've got the measure of them, the Swedish go and produce a low-slung, heavyweight, pitilessly fast hypercar, and suddenly it's hard to sustain your prejudices when you're experiencing enough G-force to separate your face from your skull. Go figure.”
— Legendary Motorsport description.

The Entity XXR shares a similar profile to the Entity XF, but assumes a more aggressive styling. The front bumper is more slanted, featuring a large CFRP splitter at its base and three inset front ducts, the central one spanning two-thirds of the car's width. Like the XF equivalent, the car features discreet ducts on the sides of the front bumper. Around the upper area, the headlight units are placed in a more parallel positioning relative to the car, featuring dual inner lamps over a circular section and small turn signals on the upper edges, with plastic details around them. The car's bonnet/hood features two levels of impression, the first creating dual sections that run from the area ahead of the windscreen's base to the central area of the bonnet/hood, almost reaching the front end and aligned with the central intake. The second level of impression is contoured to the side boundaries of the dual sections, reaching to the area next to the headlight units.

The sides of the XXR are more aerodynamic in comparison to the XF in terms of styling. The wheelbase features a CFRP skirt at its base, with a protruding lip that slightly juts out of the car. The sides of the car are dominated by the presence of dual impressions that allow airflow to the main engine air ducts and exit from the front brakes. Behind the lower impression, the body features a CF body accent bearing silver lettering displaying the car's name, similar to the XF model. The body then curves until a flat, horizontal section of the body is reached, upon which aerodynamic wing mirrors are mounted on the doors. The main section of the car's greenhouse is more or less identical to the XF's; it features a bold C-shaped arrangement for its windscreen, side windows and roof, being slightly more inclined and narrower. Behind the C-shaped section's seats are two large CF intake bulges that sit in an elevated area of the rear, with a large glass pane between these. A rear spoiler is fitted as standard.

The rear of the car is mostly simplistic in comparison to the Entity XF, with CFRP elements on the middle section and diffuser. A trapezium-shaped meshed vent is seen below the carbon-fibre strip, as well as C-shaped tail lights above it, consisting of dual red strips and a small white light. The vehicle comes standard with twin central exhausts, which can be modified to have a single exhaust or triple exhausts. The underside of the car is mostly carbon plated, leaving the axle sections and part of the engine bay exposed.

The interior of the car is shared with the X80 Proto, using the same details and dial cluster. However, it bears the manufacturer emblem on the horn cap.

The primary colour of the car is applied on the bodywork and the interior stitching, while the secondary colour is applied on the rear stock spoiler. A trim colour is also available for the interior, being applied to the dashboard, doors and seats. It uses "Chromatic Z" high-end rims that are also available in Los Santos Customs, able to support a dedicated colour (a feature only seen in naturally-generated examples such as in Content Creator).

Much like the original Entity, the XXR has a very smooth turning radius and can handle most corners with ease, however the sheer power and acceleration is surprisingly worse than the XF, despite having a good top speed, more advanced design and higher price.

The vehicle is powered by a V8 engine positioned in a rear-mid configuration. This powers the rear wheels. The exact same engine model is found in the FMJ, Cheetah and T20. Its sound is generally high revving and loud, appearing to be a high-pitched variation of the ones used in most supercars.

One of the reasons this vehicle has such impressive straight-line performance is down to its very high maximum velocity, surpassing any other car before it, however the use of a large DownforceModifier value of 175.0[1] causes it to be significantly reduced - but still superior to most cars. The downforce value gives the vehicle extra downforce, more so than the Tezeract but much less than the Taipan and Autarch.

This gives the vehicle, in stock condition, the second highest speed in the game, beaten only by the Tezeract, but on par with several other super cars, including the X80 Proto, Nero Custom and Taipan. When fully upgraded, the vehicle is surpassed by a fully-upgraded Banshee 900R and Pariah.[3]

The Entity XXR has all four advanced flags enabled[4]:

Promotional screenshot of the Entity XXR. 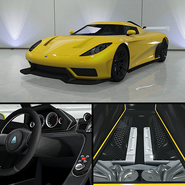 The Entity XXR on Legendary Motorsport.

The Entity XXR on the updated Rockstar Games Social Club.

The Entity XXR in a cinematic preview on Rockstar Games Social Club. Note the similarities between this image and the promotional screenshot.

The Lucky Wheel advert for the Entity XXR. 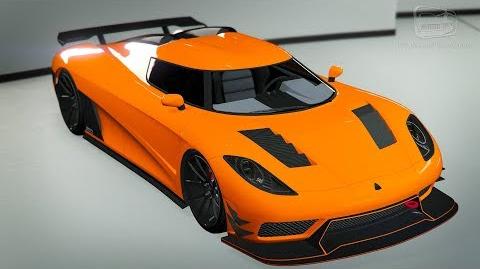