Standard White - 100%
“High taxes, socialism, constant darkness… Sweden really is proof that, if you fill a country full of hot women, people will put up with a wretched landscape. By pussying out of armed conflicts for the past 200 years and focusing instead on investment in education, healthcare and manufacturing, the Swedes now enjoy one of the highest standards of living in the world. The result is a nation that's terrible at democracy but excellent at making ridiculously fast sportscars.”
— Legendary Motorsport description.

The car's design appears to be heavily influenced by the Swedish styling of the Koenigsegg CCX for the front area, sides and greenhouse, while the rear hood is adopted from the Porsche Carrera GT. The tail lamps are nearly identical to those of the Koenigsegg Agera, with the inner ones being identical to those of the Lamborghini Aventador. The headlights bear resemblance to the S15 Nissan Silvia. The Överflöd logo on the bonnet is similar to that of Maserati with white and blue details and has the size and shape of the Koenigsegg's. It is possible to install a spoiler available at Los Santos Customs, which is based upon the spoiler on the Koenigsegg Agera R.

The Entity XF's front end features fairly simple styling. The front bumper is elevated for the regions on either side of the central area, featuring a small CFRP splitter at its base and three inset front ducts, the central one spanning two-thirds of the car's width. Like its inspiration, the car features large ducts on the sides of the front bumper. Around the upper area, the headlight units have edges parallel to a number of the car's body lines and feature four clear, circular lamps, with CFRP details around them. The car's bonnet/hood features two levels of impression, the first creating a central area that runs from the base of the windscreen to the bottom of the front bumper. The second level of impression is contoured to the base of the windscreen and the side boundaries of the central region. A small manufacturer emblem is seen on the front of the bonnet/hood.

The sides of the XF are very bold in terms of styling. The wheelbase features a CFRP lip at its base. The sides of the car are dominated by the presence of a wedge-shaped impression that allows airflow to the main engine air ducts. Behind the impression, the body features a CF body accent bearing silver lettering displaying the car's name. The body then curves until a flat, horizontal section of the body is reached, upon which aerodynamic wing mirrors are mounted at the front of the doors. The main section of the car's greenhouse is unique; it features a bold C-shaped arrangement for its windscreen, side windows and roof. Behind the C-shaped section's seats are two large bulges that sit in an impressed area of the rear, with grated sections over the engine bay and a carbon-fibre area with a small glass pane on the centre. Said rear glass pane also leaves an open duct, and the rearmost area bears the manufacturer emblem.

The rear of the car is mostly dominated by meshed vents placed on various separations and housings for the tail lamps, with CFRP elements on the separations and the housings, with the upper central one partially covered by the license plate. The tail lamps consist of red arrow-shaped lights and amber/while light strips below. The lower side comes standard with two large exhausts, which can be modified into a three exhaust triangular arrangement (one above and two below) on each side, giving six exhausts in total. Smaller vents can be seen between the exhausts.

The car's interior is the same "Super GT" one from cars like the 9F and Rapid GT, sharing the same details on the dashboard and the dial set. A small manufacturer logo can be seen on the horn cap, as well as a silver "ENTITY" badge on the passenger side of the dashboard.

The Entity XF comes in a single colour, which also applies to the interior stitching. The car uses a set of "Blade" high-end rims that are also available at Los Santos Customs.

The car is able to reach very high speeds, much faster than many other super cars, only having a slightly slower top speed than the Adder. It is capable of burning excess fuel from its exhaust, similar to cars like the Infernus, Buffalo, F620, Banshee and other cars like the Sultan when modified. It has a better acceleration than all other supercars, except the Zentorno, T20 and Osiris. It also has very high traction due to its all wheel drive system and excellent weight distribution.

The Entity XF is powered by a V8 engine, which is supported by the website claiming it is a 4.5 liter engine delivering 800hp. The engine is coupled to a 6-speed gearbox in a rear-mid engine, all wheel drive (20% front and 80% rear distribution) layout. This car emits a high-revving sound and also happens to be supercharged by default. When accelerating, the supercharger can faintly be heard whining.

An Entity XF in a Grand Theft Auto V trailer. 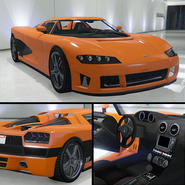 The Entity XF on the updated Rockstar Games Social Club.

The Entity XF in a Cinematic preview on Rockstar Games Social Club.

The Lucky Wheel advert for the Entity XF.

3 heavily modified variants of the Entity XF may appear in Vehicle Cargo source missions. Each variant has a unique license plate number, colour combination and different set of bodywork modifications.