GTA IV
The Enforcer is a law enforcement vehicle featured in both the 3D Universe and HD Universe. It is manufactured by Brute in the HD Universe.

In all of its appearances, the Enforcer is depicted as a large armored transport van used by the law enforcement (specifically, elite paramilitary tactical units). The Enforcer is an excellent choice, as its heavy weight makes it suitable for ramming power and also serves as a roadblock vehicle when needed. One of the noticeable features is that the player will gain Body Armor upon entry of the vehicle.

The Enforcer usually bears "POLICE" markings, except in Grand Theft Auto: Vice City and Grand Theft Auto: Vice City Stories, where it has "SWAT" markings (as some forces ceased to officially use the term SWAT over time, this may be seen as a nod to historical accuracy). Police liveries of the Enforcer depend largely on those found on local Police cars, although for GTA Vice City Stories, the game's Enforcer features a black-and-white livery, contrary to the VCPD Cruiser's green-and-white livery. Much like the "Police" car, the Enforcer in GTA III is revealed in a pre-release screenshot to originally feature a blue-and-white livery; it can be assumed that the September 11, 2001 attacks in New York City may have prompted the same recoloring that gave the vehicle its present black-and-white color.

As with all emergency/police vehicles, the Enforcer is equipped with sirens and lights which will cause other traffic to move out of the way when active. Although supposedly heavily armored, the truck is not bulletproof, although it is relatively resilient. It has seating for up to four people, including the driver.

In the HD Universe, the Enforcer is now based on an armored 1989-2001 International 4700 Series, with the front turning signals omitted (which, in-game, shares the same chassis with the Securicar and the Police Stockade).

It bears the NOOSE livery and "Liberty City Tactical Response Unit" markings. It comes with a black finish and cannot be washed at a car wash like every other emergency vehicle. Like the NOOSE Cruiser and NOOSE Patriot, the Enforcer is equipped with an LED light bar that does not make a distorted sound after being crushed or shot with a weapon.

The Grand Theft Auto: Chinatown Wars rendition of the NOOSE Enforcer leans towards a van-based design similar to the Boxville, sharing the Alphamail's body design. The truck features a simple red and blue light-bar and a white stripe down the truck, presumably leading to the seal on the side, loosely reading "NOOSE".

The vehicle's overall performance is average-to-good. While large and heavy, the Enforcer's powerful engine allows it to accelerate well and reach high top speeds, while its cornering can be properly negotiated via the use of the handbrake. Its low clearance, small wheels and heavy weight, however, make it unsuited on rough terrain, where it may roll easily.

In Grand Theft Auto IV, the Enforcer returns with a decreased top speed and less power than its 3D Universe counterpart. The vehicle still has a high top speed, however the acceleration minimizes the potential of the truck reaching it. The handling was also restricted; the truck now makes very slow turns, and the truck tends to tilt heavily upon cornering. Deformation is a rarity, unless the truck is faced with a explosive such as a Rocket Launcher or the APC's cannon. The truck is also very heavy, being on par with the Phantom, whereby the truck makes good use of crashing or pushing other road users out of the way, with only scratches on the truck. Braking is also acceptable, beating trucks like the Phantom, however its weight still prevents additional braking power.

The vehicle is heavily armored with "impregnable armor", rendering it almost completely bulletproof; while most vehicles can be destroyed by a shotgun shell to the fuel tank in front of the rear wheels, this does not apply to the Enforcer. The vehicle is still vulnerable to explosive damage, and while a steel mesh covers the windshield and protects the driver and front passenger from frontal assault, the cabin's side windows are not armored. It takes at least 10 APC cannon rounds or Explosive Shotgun rounds to trigger the Enforcer to burn and explode.

The rear axle of this vehicle is also unique as compared to most of the heavy vehicles in GTA IV, as instead of having double wheel for each side of the rear axle, this vehicle has only one wheel for each side of the rear axle which is uncommon for most heavy vehicles. It is stated by the badges to have an 8000cc (8 liter) turbocharged engine, true to its engine model, a turbocharged Inline-4. According to the fuel unit on the side of the truck, the vehicle uses unleaded fuel.

An early design of the Enforcer for GTA III. 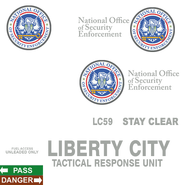 Enforcer's rear view as seen during The Offshore Offload.

In all of its appearances, the Enforcer is called out once the player has reached a four-star wanted level (three in Grand Theft Auto: Chinatown Wars), containing SWAT Officers (or, in the case of the HD Universe, NOOSE Tactical Response Unit Officers).