Yes
“The Endurex is a step up from the original Whippet in that it's red which will perfectly match the bloody knees you will get from trying to maneuver a bike with wheels a half inch wide. You deserve this bike. You feel thinner already.”
— Pedal and Metal Cycles Website.

The Endurex Race Bike is based on the original Whippet Race Bike, bearing the same lightweight frame, inverted handlebars and wheels.

The Endurex Race Bike features a white and red livery, bearing the "ENDURÉX" markings on the down tube, "ex1" and "Carbon Design" on the seat tube, along with a text on the top tube reading "ride long & hard". Its wheels are painted in black with red stripes, along with "3-way shafts" markings on it. 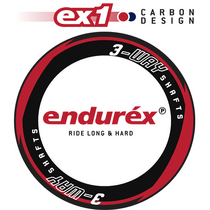 The Endurex Race Bike is one of the fastest bikes in the game, as it is able to reach a decent speed, but is unsuitable for stunts. When repeatedly pressing the corresponding button, the character' stance changes, improving top speed slightly at the cost of reduced steering capabilities.

Its handling is shared with the Whippet Race Bike.

Detail on the wheel. 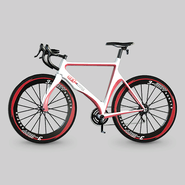 The Endurex Race Bike on Pedal and Metal Cycles.