Devin: "So are you gonna, A. Listen to some fifty grand a year pension hunter, or B. A billionaire? who even the president lets finger his wife, or C? Try and be really stupid and save those two idiot mentors of yours and have everybody in the Goddamn state crawling up your ass, A, B or C? Time's ticking pal, beep, beep, beep and your answer is?"
Franklin: "Man, you know what? Man, fuck you."
Devin: "Genius answer, pal. Total genius, but time is running. You think about it. Me? I got a triathlon coming up, and I am in deep training. Buh-bye!"
— Devin Weston to Franklin Clinton.

This page lists the events of all endings.

After Michael, Franklin and Trevor pull off a major heist on the Union Depository, Franklin is visited by both Steve Haines and Devin Weston. Steve orders Franklin to kill Trevor Philips, due to the latter's uncontrollable temper making him a liability for the FIB. Later, Devin Weston appears and orders Franklin to kill Michael De Santa, due to Michael interfering in Devin's business ventures, with Devin also holding Michael responsible for the death of his lawyer. Franklin (the player) then has to choose which of the two he is going to kill. Alternatively, Franklin can ignore both Steve and Devin, and team up with Trevor and Michael to eliminate all their enemies.

Should the player choose to kill Trevor, the mission Something Sensible commences. Franklin sets up a meeting with Trevor, where he begins discussing the problems they are facing, but Trevor thinks this is about Michael and laments how he had been backstabbing towards him.

Franklin pulls a gun on Trevor, claiming that Trevor was the "crazy one", not Michael, and he would most likely end up getting all three of them killed. Baffled, Trevor remarks that he has been nothing but truthful to Franklin, which the latter accepts but does not let down the gun.

Trevor, feeling betrayed again, escapes in his truck, with Franklin setting off in pursuit. During chase, Franklin receives a call from Michael for help. Michael then appears in a stolen car and rams into the side of Trevor's truck, causing the latter to crash into a gas tanker.

A battered and broken Trevor angrily denounces Franklin and Michael as "Judases", ordering Franklin to "take the shot". Franklin shoots the fuel, igniting it and burning Trevor to death, before the fuel tanker explodes (If Franklin takes too long and doesn't shoot Trevor, Michael will instead).

Michael and Franklin reflect on their journey and go their separate ways. Michael still considers Franklin as a close friend of his, but Trevor's death has affected him deeply and says he needs time from Franklin. After the credits, the player can only choose to play as Michael and Franklin, and Trevor's cut from the Union Depository bank job is split between them.

Should the player choose to kill Michael, the mission The Time's Come commences. Franklin sets up a meeting with Michael and calls Trevor for assistance, but Trevor refuses and claims he's "done with traitors".

Franklin confronts Michael wishing to discuss their present situation. Michael meets Franklin and is seen taking a phone call from his wife. She tells him that Tracey will be attending college, which Michael replies to positively. Franklin feels anguished after hearing this, but overcomes it and talks suspiciously, causing Michael to figure out that Franklin is sent to kill him.

Michael then drives away, with Franklin chasing him to the Palmer-Taylor Power Station. Michael climbs to the top of a generator tower, where Franklin overpowers him. Michael then laments how he was the only person who gave Franklin a chance. Franklin pushes Michael off the edge before grabbing him, clearly starting to regret his decision. Michael refuses to forgive Franklin and claims he should have killed him when he broke into Michael's house.

The game gives the player a choice to hoist Michael up or drop him. Regardless of what the player decides, Michael's fate will be the same, since if he's spared, he will headbutt Franklin, losing his grip and fall to his death. Franklin walks away and calls Lamar on the phone to make amends.

After the credits, the player can only choose to play as Franklin and Trevor and Michael's cut of the Union Depository bank job is given to his family. Trevor finds out about Michael's death, and warns Franklin to stay away from him, claiming that Franklin is "dead" to him. Amanda also finds out about Franklin's involvement and messages him, claiming that she knows that he killed her husband, before warning him to stay away from her and her family, and wishing that Franklin "rots in hell". Jimmy discovers that his father suddenly disappeared, and after finding out about his death he calls both Trevor and Franklin, seeking consolation with the former and cursing the latter.

Should the player choose "Deathwish," the mission The Third Way commences. In this mission, Franklin goes to Lester for help. Franklin and Lester, at first, seem to not have any hope of thinking of a way for both Trevor and Michael to survive. But after a brainstorm, Lester comes up with a plan. They lead the FIB and Merryweather into a trap at the foundry under the pretense of melting down the gold acquired from the Union Depository heist.

Franklin, Michael, Lamar, and Trevor fight both the FIB’s strike team and Merryweather mercenaries. Once the FIB and Merryweather teams have all been defeated, the trio set out plans for taking down their enemies, and manage to locate them with help from Lester.

Once Stretch, Haines and Cheng have been killed, Trevor heads to Devin's heavily guarded mansion, killing Devin's security guards. He locates Devin in a chest and knocks him out, carrying him to his car and throwing him in the trunk. He phones Michael and Franklin, suggesting they take Weston to the countryside and "make him disappear".

The trio reunite at the Chiliad Mountain State Wilderness, where they taunt a battered and beaten Devin, before pushing the car off the cliff into the sea. The car explodes in a fireball, killing Devin instantly. The three bring an end to their criminal careers, but remain as "flawed, awful, totally uncomfortable and poorly matched" friends. The three then drive off to their respective homes, before Lester sends their cuts from the Union Depository heist into their bank accounts. 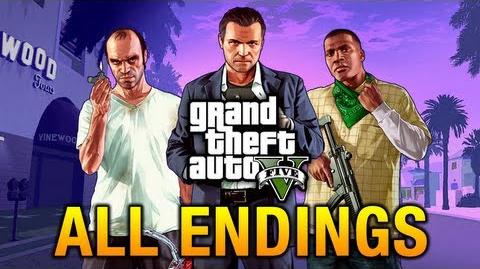