•Get in the car with Sweet.

•Security is tight in the Crack Fortress. There is only one way in but the door is locked down because of the riots.

•The only way past that reinforced entrance is to knock it down.

•A heavy vehicle like SWAT Tank will be able to smash down the entrance easily.

•Go get the SWAT Tank.

•Use the SWAT Tank to ram right through the entrance of Big Smoke's Crack Fortress.

•Smash through the wall to gain entry!

•There is an entrance into the first floor towards the back of this area.

•Smoke is on the Fourth floor in his Penthouse suite. You will have to work your way through three floors to get there.

•Smoke has switched the lights off go get the thermal goggles by the lower window.

•Tenpenny has caused an explosion, the lighting in the building is off and the whole place is beginning to burn down. You need to get out of here quick!

•Use the night vision goggles you have just picked up from Big Smoke to help you see in the dark and escape the building as quick as possible.

•This floor is on fire use a fire extinguisher to help you get out!

•Follow Tenpenny and make sure Sweet is safe, stay close to the firetruck and do not lose Tenpenny.

•Do not attempt to damage the firetruck or you may injure Sweet.

•The cop is stamping on Sweet's fingers get your car close to him in case he loses his grip.

End of the Line is the final storyline mission in Grand Theft Auto: San Andreas given to protagonist Carl Johnson by his brother and leader of the Grove Street Families, Sean, from his home in Grove Street, Ganton, Los Santos, San Andreas.

Carl and Sweet have managed to find out where their former friend, Big Smoke, is hiding. They drive over to Smoke's hideout in East Los Santos while avoiding rioters. Upon arriving, they see that Smoke's crack palace has heavy security and there's no way to enter the place except for breaking through the wall. Carl convinces Sweet to allow him to go by himself, saying that Smoke and Tenpenny played him, and also wanted to atone for letting their brother, Brian, die five years prior. Carl finds a S.W.A.T. tank nearby and steals it while being attacked by S.W.A.T. officers and Ballas gang members. He successfully smashes the wall and enters the crack palace.

Upon entering, Carl makes his way through three floors while killing Ballas, Vagos, San Fierro Rifa, and Russian Mafia gang members, as well as workers, whom all carry M4s, AK-47s, Combat Shotguns, and MP5s amongst other strong weapons. Carl manages to find Big Smoke, who claims that he doesn't feel any regrets over betraying the Grove Street Families, and takes out a gun ready to battle Carl. During a shootout, Carl manages to kill Smoke, and after a brief conversation questioning Smoke's decision, he says he had no choice and saw the opportunity for power and money before dying. With his dying breath, Smoke claims that "everyone will remember his name", ensuring his legacy. As soon as he dies, Carl sadly laments Smoke's end, muttering "Damn, man. What a waste..."

Frank Tenpenny, who had been watching the whole thing, arrives and orders Carl to put all of Smoke's money in his bag. Tenpenny threatens Carl with a Combat Shotgun, and sarcastically congratulates Carl on killing Eddie Pulaski and, now, Big Smoke. Tenpenny then states his next move, boarding a plane to flee from Los Santos to avoid the rioters. As Tenpenny prepares to kill Carl, Carl manages to distract Tenpenny by shouting Sweet's name, and as Tenpenny quickly turns around, Carl manages to dive out of the way as Tenpenny quickly brings his attention back to Carl and shoots at him, albeit missing, and flees from the room. After that, Tenpenny runs to the second floor and sets the whole building on fire by shooting a generator, causing it to explode. Carl leaves the crack palace the same way he came in, killing anyone in his way.

After successfully escaping, Tenpenny attempts to drive away in his fire truck, but Sweet jumps on his Greenwood and then leaps at the ladder on the back of the truck, and hangs on from it. Carl enters a parked Feltzer and starts to chase Tenpenny. During a long chase throughout Los Santos with Vagos and Ballas on the road throwing molotovs, and the police chasing the trio, a police officer in the truck gets out and starts stomping on Sweet's fingers. Carl gets the Feltzer under the ladder and Sweet drops onto the hood and then climbs over into the passenger seat.

On Carl's order, Sweet then takes control of the car with Carl acting as the shooter with his Micro SMG. The chase continues throughout the city with Carl destroying Police Cars, as well as Vagos rioters chasing them in Tornados and on bikes. The chase comes to an end on the bridge over Ganton where Tenpenny crashes his truck off the bridge. Tenpenny climbs out of the fire truck and deliriously shouts about how he had kept the neighborhood clean with his deeds and would "do it all again" before dying in the middle of Grove Street, where the story began and now where it ends.

Having witnessed this, Carl, Cesar, Sweet, and Kendl walk towards Tenpenny, and Carl prepares to shoot Tenpenny with a Desert Eagle "to make sure it's over". Sweet lowers Carl's gun however, instead deciding that Tenpenny "killed himself in a traffic accident, no one to blame", possibly so that nobody can link any of them or Grove Street Families to Tenpenny's demise. The Truth then appears, congratulating Carl for "beating the system", a feat which Truth claims would take ages for himself to achieve. Carl informs the others about Big Smoke's death, with Kendl remarking about how Smoke was only out for himself, a statement that The Truth agrees with, referring to it as the "surest path to Hell" ("That or forty pounds of mescaline"). As Truth, Sweet, Cesar, and Kendl walk away, Carl checks Tenpenny's corpse, before swiftly kicking it and mocking by mimicking Tenpenny's usual greetings towards him with: "See you around... Officer".

With that, the group reconvene inside the Johnson House to talk about their future, with Kendl discussing their ventures in San Fierro and Las Venturas, remarking on how "shit never ends". Ken Rosenberg, Madd Dogg, Kent Paul and Maccer enter the house, causing the rather paranoid group to ready their guns, then lower them upon seeing who it is. Madd Dogg announces his first gold record, and they all celebrate their success, and Maccer gleefully announces that he will be getting breast implants before Carl heads out of the house "fittin' to hit the block, see what's happening". Outside, Catalina calls for the last time while having sex with her boyfriend Claude, in a failed attempt to make Carl jealous. Carl expresses his annoyance and disgust at Catalina, telling her to get help.

Catalina: And you, Carl, you are jealous!

Although this is the final mission of the game, the game itself does not actually end upon its conclusion. Following the closing cutscene and credits, Carl is back on Grove Street. The riots subside, and a final WCTR news report is broadcast detailing the aftermath of the riots. One last phone call from Catalina is received, after which Carl is free to roam about San Andreas as the game enters pure sandbox mode. Any leftover non-storyline missions such as the Zero, Wang Cars, and Casino strands can still be played out, as can street races, etc.

In sandbox mode, certain aspects of the San Andreas universe continue to play out. Progress with the various girlfriends will still go up and down depending on whether Carl continues to date them or not; Carl's physical condition will still change depending on actions like working out and eating; enemy gang members may still randomly shoot at Carl when he passes.

Finally, if 100% Completion has been attained by this point, the various rewards will become available after the closing credits.

Frank Tenpenny shortly before his death on Grove Street

Frank Tenpenny after his death on Grove Street. 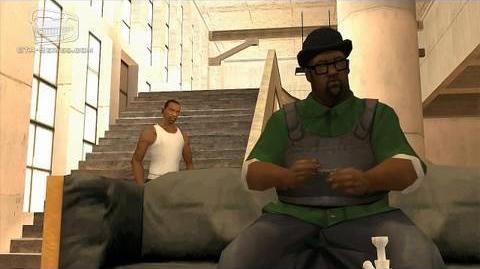 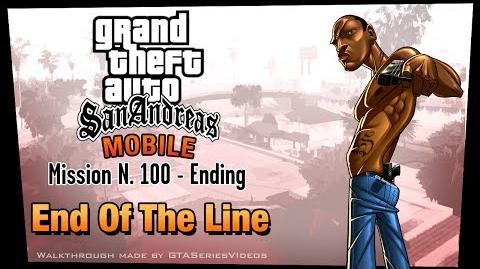 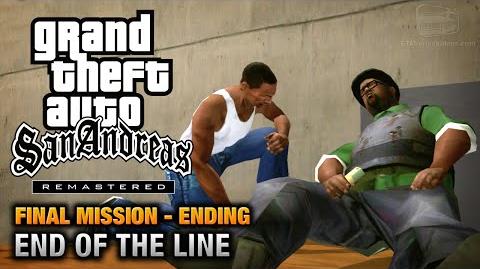