• ­Go to the Armored Boxville.

• ­Wait for your team to get in the Boxville.

• ­Go to the power station.

• ­Locate the transmitter signal in the power station.

• ­Get in the Armored Boxville.

• ­Wait for your team to get in the Boxville.

• ­Deliver the transmitter to the safehouse.

Reaching Rank 1.
Stealing and storing 28 vehicles in a vehicle warehouse.

"A SecuroServ client needs some technology in the hands of a Merryweather client. Take an armored RV to The Palmer Taylor Power Station and get it for them. They will be expecting you."
―Description

End of Transmission is a Special Vehicle Work mission in Grand Theft Auto Online as part of the GTA Online: Import/Export update. It is the "Armored Boxville Mission".

The Assistant tells the players to go and take an Armored Boxville provided by SecuroServ. The assistant then explains that a SecuroServ client had a falling out over a dark ops transmitter located at the Palmer-Taylor Power Station and hired the players to get it, while the client's business partner had the same priority and hired Merryweather Security for the job. The assistant also warns the team that they will be coming, so players have to be careful upon approaching the destination.

Once the team have the transmitter, they have to take the Boxville back to Los Santos, while defending themselves from oncoming Merryweather Mesas, Dunes and Buzzard Attack Choppers. After entering the city, Merryweather no longer chases the team, so they can complete the mission safely by going to the safehouse located under the main highway. 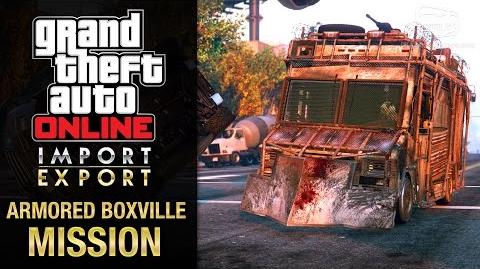 Retrieved from "https://gta.fandom.com/wiki/End_of_Transmission?oldid=1061501"
Community content is available under CC-BY-SA unless otherwise noted.