Jim: "Looks like we're about all that's left of the Alderney chapter, man."
Johnny: "We don't need numbers, man. We need brothers."
―Jim Fitzgerald and Johnny Klebitz after Brian's betrayal

End of Chapter is a mission in The Lost and Damned given to Johnny Klebitz by Jim Fitzgerald.

Johnny meets Jim, Terry and Clay in Leftwood. Jim explains that Brian Jeremy, who has started his own faction of The Lost since Billy's arrest, has asked for a truce. Johnny is sceptical, since Brian has falsely accused Johnny of "setting" Billy up, but agrees to meet him in Port Tudor. Johnny leads Jim, Terry and Clay to the docks, where they meet Brian and his faction. When they arrive, Brian starts childishly insulting Johnny and the other members whilst still accusing Johnny of being a "rat" and setting Billy up. Johnny angrily fires back that Billy didn't care about the club or the brothers, least of all Brian. This angers Brian, who orders the members of his faction to "finish off" the quartet before he leaves. Brian's faction point pistols at the quartet, who take cover.

Once the cutscene ends, the player must fight off seven waves of enemies.

The first starts immediately after the cutscene. Members of Brian's faction will ride their bikes in circles. On each bike is a driver and a passenger who acts as a gunner.

After the bike-riding bikers have been killed, some more show up in vans.

After the second wave of bikers have been killed, some more show up, again in vans.

After the third wave have been killed, a fourth wave appear, this time on bikes again.

Another van appears and four bikers get out.

A final wave appears, and ride off after confronting the quartet. The player must chase them down on Johnny's bike and finish them off.

After the bikers have been killed, Johnny speaks with Jim. Outside the clubhouse, Jim explains that he, Johnny, Terry, Clay and Angus are the only members of the Alderney chapter left, as Brian has betrayed the Lost and managed to escape the shootout, but Johnny tells Jim that the remaining members need to stick together. Jim rides off and the mission concludes. 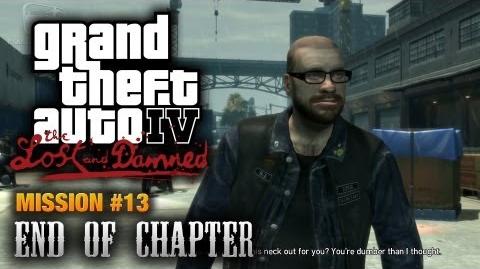