End Credits in The Lost and Damned can be seen following completion of "Get Lost". During the credits the player may see different scenarios from TLAD, and the original GTA IV. Whether it be from one protagonist's point of view or in some cases together. During the credits three different songs can be heard playing: "Every Picture Tells a Story" by Rod Stewart, "Touch Too Much" by AC/DC (replaced with "Wanted Dead or Alive" by Bon Jovi after song license expiry in 2018), and "China Grove" by The Doobie Brothers. The following can be revealed: 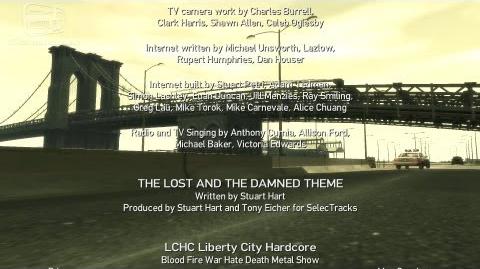 Retrieved from "https://gta.fandom.com/wiki/End_Credits_(The_Lost_and_Damned)?oldid=1325010"
Community content is available under CC-BY-SA unless otherwise noted.