In 1984, Vice City was a growing city. Economic opportunities were available to anyone who could afford them. Victor Vance, after killing Marty Jay Williams, gains access to such opportunities, creating his own crime family.

Building icons on the map represent empire building sites (such icons are absent during storyline missions, in order to reduce clutter). There are various types of such icons:

Since its creation, the Vance Crime Family was a criminal organization using several sites as base of operations for multiple criminal activities, some of them being disguised as legal front businesses. Unlike other gangs, Victor's gang will never spawn if no businesses are owned by it.

There are three levels that each business site can go through: Small-time, Medium Venture and High Roller. The larger the business, the larger the profit. Upon first creating a High Roller empire site for a business, Vic unlocks a new clothing item that is related in some sort of way to the type of business that unlocked that particular item.

These business sites, when entered, have members of Vic's gang inside. Some of them are indicated by a blue arrow, and when approached, can trigger specific missions by pressing the up button. These missions are based around the business of the operation, so smuggling businesses yield smuggling missions, for example. Additional gang members can be found on the street right outside of the site. These gang members can be recruited to assist Victor in taking over other gang businesses, and will also immediately attack any enemy gang members that come close to a Vance property, similarly to the Vercetti Gang in Grand Theft Auto: Vice City. To recruit them, they must be targeted and then the up button must be pressed. However, gang members cannot be recruited during storyline missions.

The daily income is paid every day at 16:00, unless the player is on a mission (in which case it is paid after the mission ends). If the played mission happens to be an empire building mission, then the player will get increased income for that type of business, depending on how many levels of that mission have been passed (passing just the first level will lead to a small increase of the income, while passing all the levels of such a mission will lead to a noticeably higher income).

The empire sites may come under attack from rival gangs, because to gain new sites, the player must seize them from other gangs and they will try the same in return. However, empires will only come under attack if Vance starts a war with the rival gang, which is activated when taking over one of their empire businesses. If the rival gang succeeds in damaging the site, its daily income will drop, or rarely, it can even be seized by the other gang. In order to return a damaged site to full capacity, Vic will need to pay a repair fee of $500. In order to avoid such scenarios, the player may just resort to maintaining sites obtained during the storyline and/or acquiring business sites that are put up for sale. Some of them may be put up for sale by default, while others can be put up for sale once they are lost in a gang war. Just like Victor and certain gangs can have a rivalry, other gangs can have a rivalry between them as well. They may be found randomly fighting in the streets around empire sites, such as the Bikers fighting the Cholos, or the Sharks fighting the Bikers.

Intact empire sites have 4 health points. Once a rival gang attacks Victor's empire sites (and Victor does not reach the area of the attack in due time), or two rival gangs attack one another's empire sites, the attacked empire site loses one health point. If the attacked site is not repaired and is subject to further gang attacks, it will keep on losing one health point during each attack. Eventually, once it reaches 0 health points, it will be put up for sale. This rule does not apply when Victor takes over sites, because the player only needs to successfully attack a business site once in order for it to come up for sale. Not only do damaged sites appear as such on the map, but they are also visibly damaged when driven by. For example, soot stains can be seen, as though the site had been set on fire, and some walls of the building may also appear to have been peeled off. (For further information regarding these aspects, please check the gallery).

As an added bonus, sites controlled by Victor also act as safehouses, with a save point being located somewhere within the premises. No garage, health or wardrobe services are available, however all business sites have a specific vehicle parked outside. Once all thirty empire sites are taken over by the player, the vehicles that spawn outside of them will become bulletproof and pop-proof. In addition, much like gang warfare in GTA: San Andreas, attacks on properties and random attacks on Vic will also completely cease (for the most part; occasional random attacks by Cholos members on foot may still happen, due to the events of O, Brothel, Where Art Thou?, but they will not attack business sites once all 30 are purchased).

To make profit throughout the game, the player may conquer enemy businesses. There are also storyline missions that may not be available if a certain amount of empire sites is not owned.

The player must first destroy the rivals' vehicle parked outside the building. Next, gang members will come out to defend their turf. Once defeated, the player must handle the interior of the building, by killing the remaining members and trashing the assets of the business (which are specific to the business, such as beds for prostitution sites, or printers for loan sharking sites). Once that is completed, the business is put up for sale, and can be turned into any business venture.

After attacking and seizing an enemy business, the gang that previously owned it may either attempt to seize a business that the player owns or send even more enemies after him, making it hard to keep on taking over sites. The Cholos will send two members in a Cholo Sabre armed with Baseball Bats, Gaff Hooks, Micro SMGs, and Pistols. The Bikers will send two members on a Biker Angel armed with Micro SMGs and Scorpions. The Sharks are the deadliest, as they send four members in a Gang Rancher armed with MAC-10s, MP5s, Micro SMGs, and AK-47s.

There are six available businesses to construct. They are identified as:

Legal business: They are operated by weak goons, who make use of Baseball Bats and Pistols.

Illegal business: They are operated by strong goons, who make use of MAC-10s and AK-47s. These businesses are unavailable at first, and become unlocked by attacking and successfully taking over a site that has one of the three illegal businesses, but only after completing the mission From Zero to Hero.

By 1986, two years after the events of GTA Vice City Stories, it is assumed that the Vance crime family has lost control of all of the empire sites, as they are no longer there and have either become an entirely new building or just an empty lot. From north to south, on each side of the city, the locations of the former sites have become:

5 story office building, in the center of Downtown

A small tenement complex, possibly abandoned (the brothel in Hose the Hoes)

Joe's Beds and the small yellow building along the highway

One-story building up for rent

An empire site under construction.

An empire site under construction(map icon).

A gang war between the Cholos and the Bikers over a site in Downtown.

Paying for the repairs of a damaged site.

An empire site with 75% health. For comparison, close to it, there is an intact one with 100% health.

An empire site with 50% health.

An empire site with 25% health.

An empire site that has come up for sale after being attacked (0% health).

An empire site that has come up for sale after being attacked (map icon).

An empire site for sale in Little Haiti after "To Victor, the Spoils".

Empire sites for sale in Little Haiti after "To Victor, the Spoils"(map icons).

An empire site for sale in Vice Point after "To Victor, the Spoils".

An empire site for sale in Vice Point after "To Victor, the Spoils"(map icon).

An empire site for sale in Ocean Beach after "To Victor, the Spoils".

An empire site for sale in Ocean Beach after "To Victor, the Spoils"(map icon).

Visiting Vice Beach before "From Zero to Hero" will make the Sharks lose their empire sites.

Once "From Zero to Hero" is passed, the sites will quickly be purchased by either the Bikers, the Sharks, or both.

An empire site that is both damaged and intact at the same time. 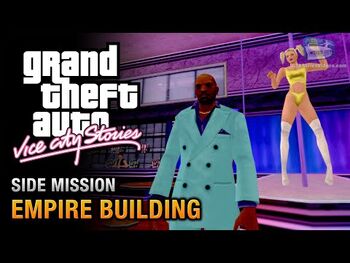