Standard variant
Beater variant
Snow variant
This article is about the vehicle. For the manufacturer, see Emperor.

The car has varied significantly since its first appearance in the 3D Universe. In GTA San Andreas, the Emperor, based on an 1990-1993 Infiniti Q45, represents a then contemporary full-sized luxury sedan, with a lean design and somewhat rounded profile. It also looks like the Sentinel, but sleeker and more profiled.

The vehicle spawns in a variety of single colors.

In GTA IV, the Emperor has become a boxy 1980's American luxury sedan, while its previous contemporary Japanese look is given to the Intruder. It is based on the classic 5th Generation Cadillac Sedan de Ville and the Cadillac Fleetwood Brougham, with an interior from a 7th Generation Pontiac Bonneville.

Manufactured by Albany, the Emperor is much more traditional and luxurious in design, having a small grille with four square headlamps on the front, with a large and bulky bumper featuring a small grille beneath and a license plate. Chrome letterings can be seen above the grille, displaying its name.

The sides make use of chrome lines passing through the doors and going towards the rear end, while the greenhouse area is predominated by chrome trims around the windows and chrome door handles, as well as square rear-view mirrors. The rear is slightly larger than its previous iteration and part of the rear wheels are covered by its bodywork.

The rear end features numerous tail lights: two sets are located on either side of the vehicle, two rectangle ones located on the rear bumper and two small square reverse lights on the trunk, with the rear license plate between them.

The Emperor is also available in a "beater" variant, which comes with junky paint finishes, worn interiors, an occasionally missing quarter panel, and old wheels and tires. There is a "slightly damaged" variant, where it typically include a missing quarter panel and slightly rusted paintjob, and a "heavily damaged" variant, where it include a completely destroyed and rusty paintjob. Both variants are depicted with broken lights on the driver side (except the inner headlamp, which remain functional).

Emperors come with a single color or a two-tone color, where the secondary one is applied on the roof and the pillars. It uses a unique set of rims with a wide center and eight slanted, wider spokes, fitted with whitewall tires.

The Emperor returns to GTA V and GTA Online with the same design as before, but some minor changes have been made, such as a black "eggcrate" grille replacing the chrome mesh, the bottom grille becoming wider, more pronounced detailing, different windshield wipers, the side mirrors having a black finish, and the removal of white-wall tires, giving the Emperor a somewhat less luxurious appearance than its East Coast counterpart.

Its beater variant also returns, which, aside from the changes mentioned above, has a slightly rusty paintjob and yellowish headlights, and does not have any missing panels or headlights. All beater Emperors feature a worn interior.

Color distribution is the same as in GTA IV for both variants, as well as retaining the same wheel design.

Acceleration and speed of GTA San Andreas' Emperor are somewhat disappointing, as are handling and braking. The engine sounds as though it is relatively large and powerful, but is apparently incapable of delivering substantial power to the bulky, rear-drive vehicle. Using the E-brake around corners almost guarantees fishtailing, making this car almost useless when driving at high speeds. It is, however, a sturdy vehicle with low chances of roll overs, and does a fairly good job of absorbing damage.

GTA IV's Emperor is powered by a high-displacement, but low-output V8 engine, mated to a 4 speed gearbox in a RWD configuration. Due to its weight and low-power engine, the Emperor is quite slow off the line, its top speed leaves much to be desired. The car feels very heavy around corners and loses much speed around them. Its soft suspension often results in its rear swinging out of control and subtle fishtailing. Braking is very poor. Crash deformation is below average, and build quality is surprisingly low, as the Emperor cannot sustain much damage before failing or catching fire.

The beater variant, much like the beaters Sabre and Vigero, has worsened performance compared to the standard one, having slower acceleration.

Both variants share the same engine sound as the Stanier-based sedans, being the Taxi, the Police Cruiser and the NOOSE Cruiser.

The improved handling system introduced in GTA V has led to some marked improvements to the Emperor compared to its appearance in GTA IV. The Emperor again seems to be powered by a high displacement but low-revving V8 engine. The engine offers low power and only decent torque. Because of this, the Emperor's acceleration and overall top speed is unspectacular.

The handling of the Emperor is decent, especially when a more performance oriented suspension is added to the car. However, due to the car's low ride height, this does cause the car to scrape against the ground in areas where the terrain is more dynamic and road clearance is necessary. This low ride height will also sometimes cause the Emperor to become stuck in areas where smaller and "shorter" cars can escape from. At speed, the handling of the Emperor can become inconsistent and is prone to fishtailing due to the overall design of the car. Nevertheless, the long wheelbase of the car does aid the driver in these situations, as the driver can countersteer out of the slide and regain control of the car.

The normal Emperor can take multiple impacts to the engine, chassis, suspension, and tires without taking significant damage that will disable the car, and it is considered one of the most underestimated and under-rated cars in terms of overall durability. The beater variant, however, is not as durable and will most likely cease to work after a few direct impacts, and can sometimes fail to start at all. The engine, as stated before, is unspectacular, but does have decent torque, which allows the large and bulky car to accelerate very quickly and also enables it to take on off-road courses that some other cars in the same class may have issues with (such as climbing Mount Chiliad). The car is fairly large and has one of the largest trunks in the game. It seats four occupants. The car's torque, combined with its weight, durability, and apparent body on frame design allows it to obtain an impressive amount of momentum at full speed, and the Emperor is easily capable of barrelling through Police Roadblocks, and is also rarely affected by other cars slamming into it or ramming it. It is one of the most durable cars in the game.

Overall, the Emperor is a solid, heavy car, with handling that isn't proportional to its straight line speed. For the price and availability of the car, it should be considered by anyone looking for a beginner's sedan that can haul a small group around, especially in areas where a durable and capable sedan is needed.

The Beater Emperor bears weaker performance than the standard variant, and takes much longer to reach the same speeds attainable by its maintained counterpart.

All variants of the Emperor share the same engine sound, being identical to the one on the Buccaneer.

A comparison between the standard Emperor (foreground) and its two variants in GTA V.

The Snow variant, as seen during The Prologue.

The snow variant of the Emperor during Bury the Hatchet, the only point in the game where it can be legitimately obtained.

The Emperor on the updated Rockstar Games Social Club.

The Beater Emperor on the updated Rockstar Games Social Club.

A snow variant of the Emperor (named as Emperor3 in the game's internal files) appears in the game for the purpose of appearing in two missions set in the town of Ludendorff. This variant is almost identical to the Beater variant, but covered in snow and bearing North Yankton plates. Most of the patches of rust on its bodywork is covered by snow, and will only spawn in white. 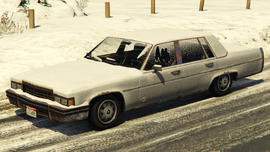