Lionel Makepeace (1984)
Fernando Martinez (1986)
“The station for laughter, and sorrow, heartbreak, and tears, and those post-therapy session blues.”

“In early 1980s Vice City, if you got caught in an extramarital affair with your wife's aerobics instructor, there was only one man to turn to: Fernando Martinez. Fernando brought make-up and make-out music to all of Vice City's lovers. Impassioned with the spirit of emotionally charged anthems by artists like Cutting Crew and Mister Mister.”

“Power ballads, montages, divorce. Standing on the brink of existence, again. Emotion is your station.”

The station assumes a more relaxed, laid-back, soft attitude than other pop stations. It encourages listeners to not fight their feelings, and even cry. Fernando's poetic yet eccentric musings about passion, emotion and desire become the central part of the radio in his first time as a DJ. He gets lost in his romantic ramblings lots of times, and tells listeners tips on how to pick up ladies, going on with his Latin lover attitude.

As a note, Jan Hammer's "Crockett's Theme" is a reference to Miami Vice, since it is the theme for James "Sonny" Crockett. This song appeared in the 1984 episode "Calderone's Return: Part 1 - The Hit List" of Miami Vice, but was actually released via the Miami Vice II soundtrack album at the very end of 1986 (on December 29), and as a single in 1987. As such, it is slightly anachronistic for it to be broadcast in a radio station during the setting of GTA Vice City.

As with all of the music radio stations in GTA Vice City, an album of songs from the station is available separately or as part of the 7-CD Grand Theft Auto: Vice City Official Soundtrack Box Set. 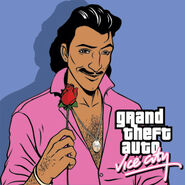 The host of Emotion 98.3 in GTA Vice City, Fernando Martinez.