Eugene Jeter Jr.
“...And remember this. Emmet is the place for guns! I've always got high quality merchandise. And I've been proudly serving the community for over 30 years!”
— Emmet to Big Smoke and Carl Johnson in Nines and AKs.

Emmet is associated with the Seville Boulevard Families, and to a certain level, the Grove Street Families. Emmet runs a small gun dealership in Willowfield, Los Santos although he is unable to compete with Ammu-Nation, who own a store opposite. Emmet, who has been selling guns since at least 1962, supplies not only the Seville Boulevard Families but the Temple Drive Families and Grove Street Families as well.

Emmet is known to the Johnson Family (in particular Carl and Sweet) along with Big Smoke and Ryder. However, they stopped buying guns from Emmet as his stock was antiquated and relatively weak. Emmet, during the mission Nines and AKs, mistakes Carl for his deceased younger brother Brian, which could possibly mean Brian and Carl looked alike. Emmet also appears to have known Carl's mother Beverly Johnson and says that he is sorry about her death and that he knows that she would be proud of Carl.

Emmet provides basic target practice for Carl and Big Smoke with old pistols he had in storage; the targets being glass beer bottles and an old car. However, Emmet reminds them not to say where they got the guns from, suggesting he does not have a licence to sell guns legally: "But remember this, you didn't get 'em from me." Emmet leaves a pistol in the yard he runs his business from for Carl to pick up, which is free for Carl to use.

Later, in the mission Reuniting the Families, Ryder gives Carl an AK-47 to hold off the police and mentions that he got it from Emmet, much to Carl's disappointment when it jams. 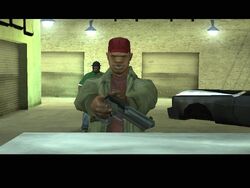 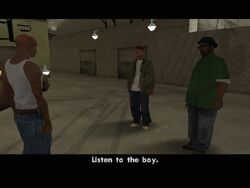 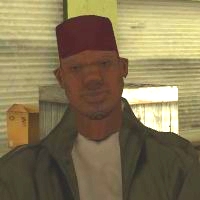