I-5
at Elysian Island

The Elysian Fields Freeway is an east-west highway in southern Los Santos that serves as a freeway bypass of Route 22 through the Port of Los Santos. Its carried by Elysian Freeway Bridge and is a major connector between East Los Santos and LSIA.

From the west, The four-lane elevated freeway continues from the La Puerta Freeway at an off-ramp into the Port. As soon as it touches ground after the Desmond Bridge, it hooks north along the Murrieta Oil Field, and crosses El Rancho Boulevard at the intersection of routes 17 and 18. It becomes a proper freeway at this point (widening up to six or eight lanes) as it reaches the the intersection of the Interstate 4/Route 15. From there it continues as the Del Perro Freeway (Interstate 2).

The Elysian Fields Freeway at dusk with the Miriam Turner Overpass in the background.

An aerial shot of Route 20 and the Four Level interchange. 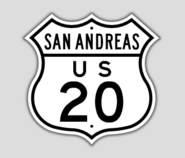 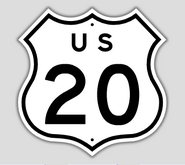