Standard White - 100%
“Oversized, oversexed, overpowered and understeered, this is the car that joined cheap contraception and masturbatory guitar solos to form the unholy trinity of Baby Boom Americana. But before you reach for your vintage jacket and the sepia filter on your Snapmatic, be warned: this old dog has torn the limbs off braver hipsters than you...”

The Vapid Ellie is a muscle car featured in Grand Theft Auto Online as part of the Southern San Andreas Super Sport Series update, released on March 27th, 2018, during the Ellie and Tezeract Week event.

The Ellie is primarily based on the 1967 Ford Mustang/Shelby GT500, with strong influences from the special, body kitted version of the car named Eleanor from the movie Gone in 60 Seconds. While the Ellie has the GT500's overall body shape, it includes multiple design cues from other Mustangs, such as the front lights of a 1970 Ford Mustang Grande, with the additional fog lights from the GT500. The front bumper's valance is based on that of the 1965 Shelby Mustang GT350R. The rear panel and tail lights are from a 1971 Plymouth Barracuda. The side-vents are inspired by a non-Shelby Mustang from 1967, while the centred rear-exhaust is somewhat loosely based on that of the 1970 Shelby GT500. The Ellie can be considered the classic version of the Dominator, a car which is based on more modern Mustangs.

On the sides, the car features distinctive formations passing through the doors and reaching to a set of dual intakes intended for ventilation of the rear brakes, while the skirting area features chrome details on it. The greenhouse area features chrome trim around the windows, the windshield wipers, cone-shaped mirrors and door handles, while the rear quarter sections feature small intakes. A chrome fuel cap can be seen on the driver-side rear section.

The rear section consists of a small trunk with a lip spoiler, followed by a black panel on the rear end featuring a chrome trimming around it. The same panel holds the license plate on the center, a small manufacturer badge on the passenger side and a set of rectangular tail lights. There is a small bumper and twin exhausts below.

The interior of the car is mostly unique, consisting of a grey backing with a chrome trim around it, holding a set of circular aircon units on the left and the radio set on the right, centered to the entire dashboard. The dials themselves are the same ones used on the Dominator, although enclosed by chrome surroundings and small caps on the center, together with red warning lights below the central gauge. The dashboard features a chrome detail below, with a passenger glove compartment and another circular aircon unit. The central column also has a grey backing with two gauges near the dashboard and the gear stick. The steering wheel has a wooden finish with a chrome detail, bearing the manufacturer emblem on the center. The area behind the seats seem to feature a frame on the roof.

The vehicle is only painted with a primary color for the bodywork and the frame on the interior. Although not accessible, an interior color is available for the dashboard, the doors and the interior stitching. Its wheels share the same rim design as the Sabre Turbo and the Rapid GT Classic, being a derivative of the "Muscle Freak" muscle wheels available in Los Santos Customs.

With suspension upgrades, the vehicle's wheels will camber positively slightly.[1]

The Ellie has good performance overall but does not compete with other top muscle cars in the game. It has decent top speed, moderate acceleration and great traction, though it can spin out very easily if turning a corner too hard and its brakes are fairly good, but still not enough to keep up with faster Muscle cars.

The Ellie has all four advanced flags enabled[2]:

The Ellie is powered by a single-cam V8 engine, coupled to a 5-speed gearbox in a front engine, rear wheel drive layout. The engine sound is shared with muscle cars like the Dominator and the Ruiner, though edited with a louder noise that is more apparent when idle.

Promotional screenshot of the Ellie. 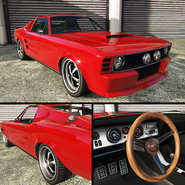 The Ellie on the updated Rockstar Games Social Club.

The Ellie in the cinematic preview on Rockstar Games Social Club.

A female player standing next to a red Ellie shown in an event week. 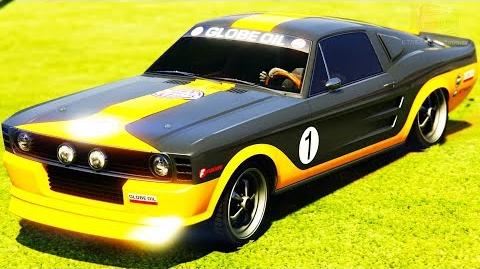 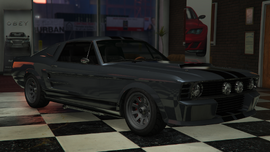 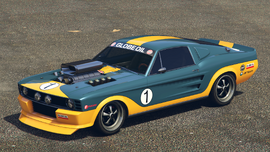 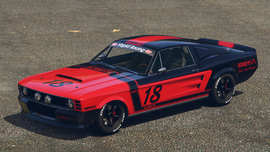