Charlie Parker
“Being tough in a man's world... I guess I wasn't so tough, huh?”

— Elizabeta Torres to Niko Bellic in Have a Heart.

Elizabeta is a successful and well connected drug dealer in Bohan, employing both Johnny Klebitz and Niko Bellic.

Elizabeta Torres was born in 1977 in Puerto Rico, although the LCPD lists her birthplace as South Bohan. In Marta Full of Grace, Elizabeta tells Johnny Klebitz that when she was fourteen years old, she was almost raped by a man in Puerto Rico. In her words, she "fed him his balls". Killing him earned her a dangerous reputation in Puerto Rico and she became feared despite her young age.

In 1991, aged fourteen, Elizabeta moved to Bohan, Liberty City, presumably with her parents. Immediately, Elizabeta started her drug dealing business, and with her contacts in Puerto Rico she became a successful drug baroness. Growing up in Bohan, Elizabeta met Manny Escuela and possibly Mallorie Bardas, whom she may have known prior since they were both born in Puerto Rico. It is likely that Manny and Elizabeta drifted apart soon after, as Manny gained his own reputation as a pacifist and "street cleaner," taking down drug dealers in Bohan, and Elizabeta being exactly what he sought to eradicate, probably led to them going their separate paths.

Events of GTA IV and The Lost and Damned

Elizabeta is asked by The Lost MC leader Billy Grey to help find buyers for a "big pile of heroin". Around the same time, Elizabeta sends Niko Bellic to protect Patrick McReary during a drug deal. The deal goes sour, forcing Niko to kill the attackers with a sniper rifle.

The Lost M.C. Vice President, Johnny Klebitz, arrives at Elizabeta's home during a house party while she's dancing with Carmen Ortiz and Kay Hartman. She informs Johnny that she found him a buyer and is going to send a new guy from "Eastern Europe somewheres" along with him. Johnny takes a seat and waits for Niko. When Niko arrives she introduces him to Johnny and Playboy X and sends them to oversee the heroin deal with Johnny.

Later, after arguing with Little Jacob over some crooks who stole her cocaine, Elizabeta asks Niko Bellic to retrieve it. Afterward, the police begin a crackdown on Elizabeta's illicit activities for her, which causes her to become increasingly edgy, restless, and paranoid.

During Niko's last visit to Elizabeta, she explains to Niko that she can feel the cops on her, that her bodyguard Jorge turned states, and that everyone's a rat. In her disturbed state, she shoots and kills Manny Escuela and Jay Hamilton when Manny tries to film her as a part of his documentary about cleaning up the streets of Bohan and requests that Niko get rid of the bodies. She then warns Niko to stay away from her, as the LCPD is rapidly closing in on her operation. Niko either gets the bodies to the doctor, destroys the car or dumps it in the water.

Johnny Klebitz later works with Elizabeta, by stealing a van full of cocaine from the The Angels of Death. To do this, she also employed Malc and DeSean of the Uptown Riders to ambush the convoy at the tollbooth to Bohan. They were successful, and made away with the drugs. She employs Klebitz again a few days later to pick up Marta, a friend and drug mule from Puerto Rico. She was being arrested by an airport official, but escaped when Klebitz knees the custom's agent in his groin.

She employs Klebitz and the Uptown Riders one last time to sell coke to a couple in Bohan, but the deal goes wrong, with one of the couple shooting Klebitz' Hexer, forcing him to ride with Malc. The police saw this as a terrorist attack, and sent many officers to chase down Klebitz and Malc. They all escape, and Klebitz takes a disabled police cruiser to suffice for a new vehicle. After this, she warns Johnny to stay away from her, as the heat is closing in.

Johnny can call Elizabeta later on and hear her in a frantic state, shouting at Marta to flush some drugs down the toilet, as police are about to raid her home; She tells Johnny that they're alright, laughs somewhat hysterically, and hangs up. Mallorie also calls Niko and tells him about her being arrested.

Shortly afterwards, Elizabeta enters police custody. According to Weazel News, Liberty Tree reports, and radio news, she is sentenced to three hundred years (effectively a life sentence) of imprisonment for thirty charges (ten years each) of cocaine distribution, a new record in the Liberty City crime society.[1] This happens at around the same time as the deal between Niko, Packie, Luis and Gay Tony. The trial likely happened while Niko was working for Ray Boccino and the McReary Family.

Elizabeta Torres' car is a unique white and pink Voodoo, which can only be obtained during the mission "Have a Heart".


- Believed to be involved in the sale of large quantities of cocaine, marijuana, mdma, and ecstasy to street distributors. 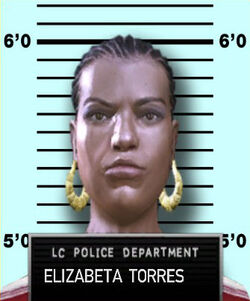 Elizabeta's unique pink and white Voodoo, obtainable only during the mission "Have a Heart"

Elizabeta in The Lost and Damned.