"We're going to have some fun, cariño."
―Liz talking to the player when being picked up

Elisa "Liz" Macallen[1] is a minor character in Grand Theft Auto V and a possible Booty Call for Franklin Clinton.

Liz's accent and appearance suggests she is possibly of Hispanic origin, but her surname seems to suggest that she may also have British or Irish roots. Various NPCs share Liz's character model. Her model is also used by female Vagos and Azteca models.

By the time of the events of GTA V, she's dating Alonzo, a student attending ULSA. It is apparent that Alonzo mistreats her, forcing her to do housework and abusing her verbally and physically. Liz has a private Lifeinvader account that can be seen posting on Kyle Chavis's wall, indicating they had been in a relationship until she surprised him at "work" with another customer causing her to break up with him prior to dating Alonzo.

After Franklin purchases the Downtown Cab Co, one of the calls he'll receive will be a special private fare requested by Alonzo. Franklin collects Alonzo at the university and takes him to where Liz's Gauntlet broke down. When Franklin compliments Liz's attractive appearance, Alonzo's simple response will be to pull Franklin out of the Taxi and fight him, enraged at his comments towards her.

After Alonzo is dealt with, Liz will ask Franklin to take her to her friend's apartment at The Tahitian on the corner of Strawberry Avenue and Carson Avenue. Franklin says it was the least he could do after beating up her boyfriend but Liz comments about her miserable relationship with Alonzo, and how he was a jealous boyfriend that abused her to the point of him beating up her stepbrother, just because he gave her a hug, and that he "wasn't blood". She then states she never saw anyone stand up to him like Franklin. After arriving at her friend's place, she thanks Franklin for his actions and gives him her phone number, asking him to call her some time. From that moment on, Liz will be available on Franklin's contact list for a booty call.

Her phone number is 611-555-0126. Calling her as either Michael De Santa or Trevor Philips will still allow the player to set up a booty call with her. 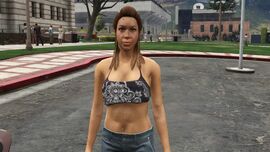 Liz waiting outside the ULSA campus. 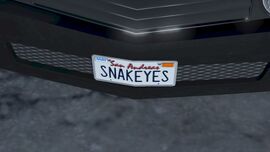 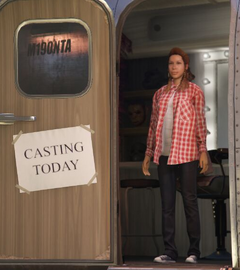 Retrieved from "https://gta.fandom.com/wiki/Elisa_Macallen?oldid=1219287"
Community content is available under CC-BY-SA unless otherwise noted.