View source
watch 02:52
Roblox: DeepWoken - The Loop
Do you like this video?
Play Sound
For the sports car in Grand Theft Auto: San Andreas, see Elegy.

ELEGY2
“Born in the fires of Mt. Fuji and tested on some German toll road, you can finally legally own this legendary supercar without the fear of having your door kicked in by the FIB because they'd rather crush import cars than catch terrorists.”

The Elegy RH8 is prominently based on the Nissan GT-R (R35), seen in the greenhouse area, front quarter, rear bumper area, natural rear wing and wheels. The front bumper and headlights are reminiscent to that of the Infiniti G37 Coupe, while the rear taillights are similar to the Infiniti G35 Coupe. Additionally, the rear end seems to be inspired by the FT-86 Concept.

The Elegy RH8 is designed as a two-door sports car with a sleek appearance, appearing to have a Carbon-fibre splitter at the bottom and inserts around the three front intakes, which span almost the whole width of the car. On the upper area, there is a small grille with the Annis badge centralized on the car and L-shaped headlamp housings, each one containing circular lamps with square-shaped turn signals. Both the grille and the headlamp housings have a plastic trim surrounding them, and the bonnet features a prominent elevation on the centre with slanted sections near the headlamps, which opens to reveal a triangular strut brace over the engine bay.

The sides of the car feature inset panellings around the doors, with slanted sections on the front fenders and leading to the rear fender vents, directing air flow to the rear brakes. There is a set of carbon-fibre side skirts located at the bottom, with concave formations below the doors. The greenhouse area makes use of plastic finishing around the windows, the A-pillars and the seprataion of the rear-quarter windows. A set of mirror wings can be seen mounted on the doors, along with "RH8" badges on the front fenders and an "ELEGY" badge on the rear window, just near the rood panel.

On the rear end, there is a slanted wall with a lip on the upper side, with "ELEGY" embossed on the centre of the wall and a small "Annis" badge above. There is a permanent red strip around the upper area, with a thinner strip on the centre and twin red circular lamps on either side. The bumper consists of a body-coloured section holding the license plate and a carbon-fibre diffuser with a rectangular reverse light on the centre and two housings for the dual exhaust tubes. The car may spawn with or without a spoiler.

The vehicle uses a dedicated "Elegy" interior, which is largely identical to the one used in the Banshee. However, the dials have a red tint. The passenger side of the dashboard also has the corresponding badge displaying the car's name, while the steering wheel bears the manufacturer badge.

The primary colour of the car is applied to the bodywork, while the secondary colour is applied on the bonnet, roof, mirrors and stitching. Its rim design is similar to the "Endo v.1" sport rims available in Los Santos Customs, although the lack of bolt details around the centre makes it more identical to the tuner variation.

The car accelerates relatively well from a standstill and reaches a good top speed. It also has very little wheel spin, thanks to the all wheel drive system. The car has good weight distribution and also has good balance when cornering, including high speed cornering. Cornering feels responsive most of the time, with good stability afforded to the driver, even at high speeds, rain, or snow.

The Elegy RH8 is one of the best handling cars (especially in the "Sports" class), due to its great traction, even weight distribution, and all-wheel drive configuration, but its Achilles heel is its braking, which even compared to some of the SUVs is very poor. However, due to its exceptional handling, braking is not always needed when taking corners, although needing to come to a dead stop quickly, unless the player uses the handbrake in tandem with the normal brakes, may become problematic in this car. It will also stall if one attempts to make a sharp 180 using the handbrake at high speeds - that is, if the player end up still going backwards after being turned around, if one continues to try and accelerate forwards, one will stall out for a split second.

The Elegy RH8 features a what is stated to be a 3-liter engine capable of pushing 560HP. The engine model appears to be a single cam V8, coupled to a 6-speed gearbox in a front engine, all wheel drive layout. The engine sound is generally low revving and rather loud, comparable to the one used in the Futo but with a lower pitch.

Official screenshot of the Elegy RH8.

The bumper sticker on the Elegy RH8. 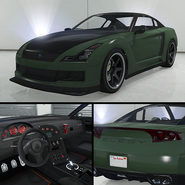 The Elegy RH8 on Legendary Motorsport in the enhanced version of GTA V. 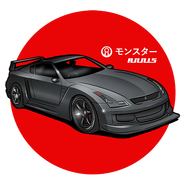 An Elegy RH8 on the graphic of the Annis Japan Tee in Grand Theft Auto Online.

The Elegy RH8 on the updated Rockstar Games Social Club.