Yes
The Willard Elegant (known as Elegance in the beta) is a four-door sedan in Grand Theft Auto: San Andreas.

The car is mostly based on the Eighth Generation Buick Roadmaster sedan without the rear fender skirts and a inverted grille, which resembles that of a 1985-1988 Pontiac Grand Am. Some styling comes from the Second Generation Ford Crown Victoria, through it started production in 1998, thus making this anachronistic and likely coincidental.

The Elegant is possibly a "cousin" to the Premier, since they are similar in build.

Despite the Elegant's substantial curb weight, a very powerful V8 propels this rear-wheel drive monster quite impressively. Its performance attributes are very similar to those of the Premier, just on a larger frame: engine performance and handling are quite satisfying, although slight understeer is evident. This can, however, be compensated for with the E-brake around corners. Because of the vehicle's mass, it cannot reach quite the same speeds as the Premier, and requires longer stopping distances. This does, however, comes with the compromise of increased durability and better ramming capabilities, and handles well in gunfights.

It can only be modified at TransFender.

A billboard in Rodeo advertising a "'92 Elegance", hinting one of the car's original names. The car is associated with the Willard name. 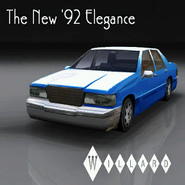 Beta Version of the Elegant, known as the "Elegance".