In-game time
“The market’s about to be flooded with inferior product. I... WE... have too much invested in it to let that happen. I need you to get in some Lazer fighter jets and take out the planes holding product before they land. It sounds extreme, but these are desperate times.”
— Description

Effin' Lazers is a mission in Grand Theft Auto Online given to the player by Martin Madrazo. It is available for 2 players.

After learning that rivals are bringing in product to one of Martin Madrazo's markets, Madrazo wants the team to act on it before the planes that are carrying it land. Madrazo has left two Lazers at Sandy Shores Airfield for the team to use to do this.

Once the players have entered their Lazers, they will have eight real-time minutes to destroy seven planes carrying the product flying over San Andreas.

Once all the Lazers are destroyed, the timer will stop and Madrazo will send a text informing the players that the rivals have contacted Merryweather Security, who come after the team in five Buzzards. The team must take out all the Buzzards.

When all Buzzards are destroyed, the team must safely land both Lazers at Sandy Shores Airfield. Once that is done, the mission is completed. 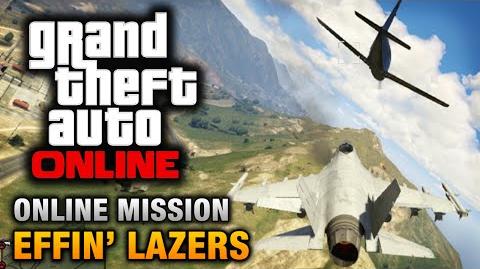