In-game time
“I thought the "journalists" in Los Santos had more important agendas, like keeping celebrity out of rehab and actors in the closet. How my humble interests interest them, I don't know. Help me quieten down the editor of the Daily Globe before he shares his exclusive with the LSPD in La Mesa. And bring me his photos.”
— Description

Editor and Thief is a mission in Grand Theft Auto Online given to the player by Martin Madrazo. It is available from 1 to 2 players.

The team has to go to the Daily Globe building. If the player starts the mission and does not have a Personal Vehicle parked nearby, a black Dominator will be spawned in front of the player for use.

The Daily Globe Editor will be driving his red Voltic from the office to the La Mesa Police Station, sometimes varying his route. The team has to kill him before he arrives and pick up the photographs.

If the editor has not been spooked before he arrives at the destination, he will exit his vehicle and run to the entrance. If he has been spooked and manages to reach the police station, the mission will fail.

After killing the editor and collecting the briefcase, the team has to lose their wanted level and deliver the photographs to Madrazo's house to complete the job.

Stopped at the lights on Peaceful Street.

Arriving at the police station. 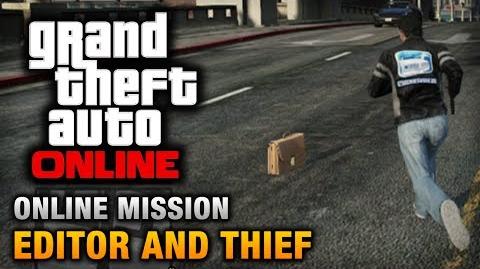