Victor Verhaeghe
For a similarly named character, see Eddie Toh, or for the character in Grand Theft Auto V, see Eddie Low (GTA V).
“Joke!? Joke?! Eddie never jokes, Eddie needs to be taken seriously. They laughed at him once, but you can't laugh without a tongue. You can't point if you haven't got fingers, can you? That's what daddy told me, late at night. In my room.”
— Eddie Low to Niko Bellic during his first random encounter.

Eddie was born in San Fierro in 1976[2]. He writes online that his father would force him to wear girl's clothes and grow his hair out (even sending him to school dressed that way), as well as forcing Eddie to perform sexual acts on him. Eddie later killed him out of spite. He had a little brother (whom he apparently placed in the oven), but killed him and hid his body in a pond. In elementary school, he would dig a hole and sit in it, and one of his first murder victims was a red-headed kid who urinated in the hole. Also, in school, he would touch other kids inappropriately, otherwise he kept to himself.

He loved his mother very much, even in a romantic and/or sexual way (extreme Oedipus complex), despite that she forbade him from watching television (with the exception of cartoons and wildlife programs) and punished him for masturbating. One day, he accidentally suffocated and killed his mother, by putting her head under the sand. This was an honest mistake on Eddie's part, as he claimed that he wanted to marry her. Since, Eddie has saved all of her clothes (including underwear) for cross-dressing purposes and kept her severed breasts in a shoebox under his bed, a reference to serial killer Ed Gein, who was found to have kept female victim's breasts in shoeboxes in his home. He mentions a grandpa that he touched inappropriately, and his grandma punishing him, hinting that he may have been raised by them thereafter.

Although Eddie has a house in Dukes (where he leaves vomit and feces uncleaned all over the house, and once locked a woman in the cellar), he kills people all over Liberty City and Alderney. It is likely an inherited childhood home, as he remembers playing in an apple tree in the backyard as a boy. He is known to often burn tires in his backyard so the neighbors won't smell the rotting bodies locked up in his home.

He is notorious for killing his victims late at night, such as joggers, whom he sees as "selfish and vain". During a conversation with Niko, he states that he loved a woman but later found out she was a "whore". This is likely the same woman he refers to on both of his blogs — while buying supplies at a hardware store, a female clerk tells him "have a nice day" as many clerks are supposed to. Eddie, without adequate social understanding, believes she has a crush on him, so he follows her home and asks to "nurse" on her (suck on her breasts) and when she resists, Eddie kills her in anger.

Throughout the game, Weazel News and various Internet websites report a mysterious, nameless serial killer who has been attacking, touching, murdering, raping and mutilating the bodies of people in Liberty City, leaving the police without clues as they instead focus their efforts on making a nickname for him, as Niko meets him doing "work" in Alderney. Once Niko kills Eddie Low, the police find his body and, subsequently, evidence at his home that reveals him to be the killer. Eddie Low has two blog pages on MyRoom (a parody of MySpace) and Blogsnobs. They are both titled 'Eddie Low Filth Slayer'. Not surprisingly, in his MyRoom page, it says that he has zero friends. He also leaves a few comments on websites. His Blogsnobs site is Eddielowfilthslayer.blogsnobs.org. He was being hunted by detective Jon Atkinson who wants to make a film and a book detailing his hunt for the killer. Eddie knows his name and mocks his capabilities as well as his clear aspiration for fame.

Eddie Low has most, if not all, stereotypes of a serial killer - white male in his thirties, abandoned by father, strict mother and abused by a family member, as well as the Macdonald triad of firesetting, animal cruelty and bedwetting past the age of five. He is categorized as a disorganized-asocial killer — a killer who acts on impulse and leaves bodies out in the open. His motives, sorted into four categories for all serial killers, are mostly hedonistic but with elements of all four.

Eddie Low is partially based on David "Son of Sam" Berkowitz, New York City's most infamous serial killer during 1976-77, including Eddie's online manifestos based on the "Son of Sam letter", and the investigators' plans to turn their search for him into a book or movie. Son of Sam insists that his neighbor's dog telepathically communicated to him that he should kill, while Eddie has a neglected pet cat at his home that he is constantly annoyed by, though he shows self-control for once and says he would "never hurt Boo Boo Wilkins". Son of Sam targeted couples that showed public displays of affection; Eddie, however, targets lone joggers, as indicated by his comments on the Whattheydonotwantyoutoknow.com website. Low may also be based on Albert Fish. Fish was a cannibalistic child serial killer who was notorious for the number of sexual perversions he indulged in, much like Low.

Niko Bellic meets him across the street from the Auto Eroticar dealership in northwest Alderney City in an alleyway. He only appears there late at night, from 22:00 to 4:00, right after Alderney is unlocked after "Three Leaf Clover". Eddie introduces himself to Niko and greets him with some disturbing comments. Niko attempts to leave, but Eddie apologizes for his awkwardness and insists that Niko helps him, where Niko reluctantly agrees. Eddie asks for a ride to the docks so he can "drop off his friends" or "kids" (which is likely the head of a jogger he murdered, who is mentioned to have been decapitated on the news, Eddie also jokes about "heading off"). Eddie begins to talk about his life in strange ways and ask Niko about his accent, asking if he's from East Europe, mentioning Romania, Bulgaria and the Balkans. His next port of call is Westminster, Algonquin (one of his "hunting grounds"), as he has heard enough screams of the people of Alderney, and wants to hear the screams of Algonquin people, remarking at how he likes distinguishing varying accents through their screams.

"The serial killer who has been beheading joggers and other people foolish enough to go out late at night on their own has struck again. This time, it's the same old story. A young victim found in a sports bag. No head. And cops left rubbing theirs, as they wonder what to call him. Detective Jon Atkinson, who has been on the case since the beginning, made the following statement: "It's a great tragedy. People are focusing on the wrong things. Until the general public starts to focus on what matters, we don't have a chance of catching this guy. People are going to have to tell me: do they want the movie to be serious, or have a comic twist? Should I have a love interest? What about my partner? Will he be older and wiser, but close to retirement, a man who dies in the penultimate scene? Or a young punk, who needs a wisecracking older guy to show him the ropes? I'm really struggling with my first draft of this screenplay, and people are just going to have to be patient.""

He appears for a second time in a dark alleyway in western Berchem (at the same time again) and attempts to make small talk. Niko is taken aback by Low's strange and disturbing comments, including asking Niko if he enjoys being spanked. Niko sternly tells Eddie to "fuck off", and that his behavior is "not cool." An enraged Eddie launches into a tirade about how exactly he's tortured and killed children. For example, he says that he once kidnapped a quarterback, conducted anal rape and "strangled him into knots," and pulled out the intestines of another girl "just to see if he could feel anything. But he couldn't," Eddie states. This prompts Niko to respond with, "You should get laid or something." Eddie says that he already did; "a little jogger down by the water, but you know what, handsome, I got a hunger tonight that can't be sated, come here!" Low then takes out a knife and attacks Niko, who kills him in self-defense.

"The unnamed serial killer who has plagued Liberty City for months and baffled the police department's nickname division has been found dead; Himself seemingly the victim of a murder."

Eric House: "The man, who was found with several journals confessing to his crimes appears to have targeted the wrong victim and then killed in a fight. The killer's name was Eddie Low. Police are searching his apartment in a quiet Dukes suburb for more information. Residents were angry."

"The serial killer they couldn't name has been found. Dead. The killer is believed to have killed up to 10 people over the last few months, usually joggers or nighttime strollers. Police believe he attacked the wrong person, and was himself killed in a fight. Detective Jon Atkinson told this newspaper, "It's very disappointing. I was just about to make an arrest. I'd solved the case. His name was Eddie Low. He lived in Dukes - I was literally heading over to his house when the news came in another body had turned up. Obviously, the screenplay I am writing about the case will now have a slightly different ending, in which I make the arrest, and it will carry the subtitle 'based on true events', because that will make a better story." The mayor commented, "This is not the LCPD's finest hour. We have a killer on the loose for months, and no leads; then they give him this stupid nickname - 'Eddie Low'."

"What kind of a nickname is that? Heads will roll for this. Oh, bad joke. I mean, people will suffer." Eddie Low was the killer's actual nickname. He was a loner Dukes, who apparently kept an account of his actions online here and on the popular networking site MyRoom." 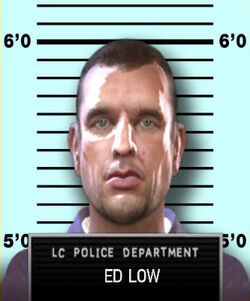 A random encounter with Eddie Low.

The message of mission failure if Eddie Low gets away after being disarmed. 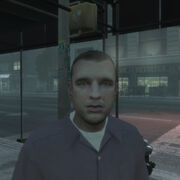 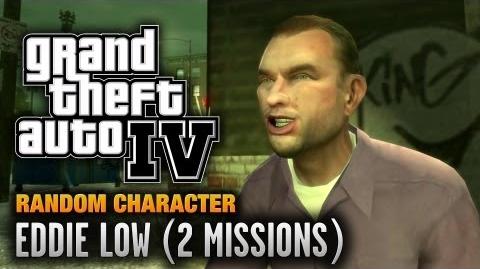 This article or section needs to be cleaned up to meet the standards of the GTA Wiki.
Integrate and purge