The Eclipse Towers during daytime.

It is a 27-story (89 meters) white building based on the Sierra Towers, a high-rise condominium building in West Hollywood, California. The exterior of the building has been updated since the launch of Grand Theft Auto V on PlayStation 4 and Xbox One.

The parachute jump Aim for the Fairway requires the player to jump from the top of the building and land at the Los Santos Golf Club.

One of the 15 Knife Flights needed to attain 100% Completion needs to be performed between the Eclipse Towers and the adjacent Schlongberg Sachs building.

In GTA Online, the apartments 3, 5, 9, 31 and 40 as well as the penthouse suites 1, 2 and 3 are available for purchase through Dynasty8realestate.com. The apartment 3 was later included on the High Life Update, with a different interior. After the Heists update, the Garage and Apartment entrance were both re-designed for PlayStation 4 and Xbox One players. 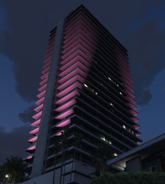 Eclipse Towers entrance on Next Gen Consoles and PC.

Eclipse Towers Garage entrance on Next Gen Consoles and PC.