The small area in the center is unnamed in GTA V. This was later fixed in GTA Online, now being part of La Mesa.

“East Los Santos has a high concentration of Latino residents and a strong gang presence, in particular the Mexican gang Los Santos Vagos and, in the Murrieta Heights area, El Salvadorean gang the Marabunta Grande. Not recommended for tourists at night, or during the day for that matter.”

East Los Santos is inhabited by a large Latino community composed of mainly Mexicans, Salvadorans, and Guatemalans. East Los Santos used to be dedicated towards industry and hard labour, but in recent years, gentrification has gotten rid of the large factories. Throughout the area, there are many rundown workshops, factories, and warehouses that have been converted into garages or homes. However, the power plants and factories near the Port of Los Santos are still running and provide power for the city.

Despite the recent gentrification and installment of residential homes, there is still a large gang presence in the area, mostly with the Los Santos Vagos and the Varrios Los Aztecas. The crime mostly happens in the darker, more isolated areas of East LS, especially the abandoned industrial workhouses.

East Los Santos is split up into many smaller neighbourhoods including La Mesa, El Burro Heights, Murrieta Heights, and Cypress Flats. Most of these neighbourhoods are poor, except for the ones towards the north, near Mirror Park.

Michael calls Lester Crest to inform him that he is joining the crew once again. Michael then travels to the neighbourhood of Murrieta Heights, where throughout the story, Lester assigns missions from his home.

It is based on the real life district of East Los Angeles, a largely Hispanic area of Los Angeles.

Several Hispanic street gangs are in control of East Los Santos, and make up most of the gang activity. It is extremely dangerous to wander about in the gang-controlled neighbourhoods at night, as there is a chance of being shot. The gangs that control East LS are: 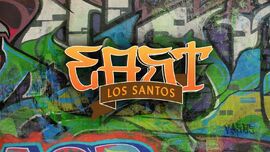 East Los Santos as seen in the next-gen trailer.