The Earpiece is a piece of gear featured in the HD Universe of the Grand Theft Auto series.

Luis uses an earpiece only during the Club Management side mission, where he receives instructions from Joni for basic management or from Dessie for important tasks for VIPs and celebrities.

The Earpiece is presumably a Bluetooth earpiece connected to the player's phone. It is used by protagonists to communicate with one another during heist missions. It is a cosmetic item with no practical usefulness over the default earpiece provided in the heists.

The Earpiece was introduced as a purchasable item in Grand Theft Auto Online as part of the Heists Update. There are three variations: a basic gray one, a red one with a different shape and an LCD one.

When the player talks when using a mic and the earpiece on, a blue light will flash on the side of the earpiece. 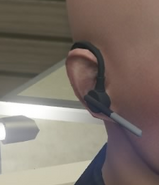 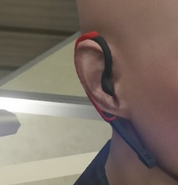 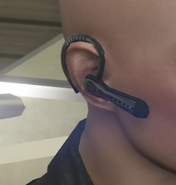 The three ear pieces are in the heist gear section of Ammu-Nation. All three models are available by default.