He was voiced by the late George DiCenzo.

At an unknown point in time, Kelly began working at the Print Works on the Little Havana/Little Haiti border. Whilst working at the print works, he began printing counterfeit money on a small scale, continuing to do so for a number of years.[1]

In 1986, the Print Works is bought by Tommy Vercetti. Vercetti plans to keep the print works open, and Kelly proposes continuing his business of printing money, albeit on a larger scale with better quality plates. Vercetti acquires the plates, and Kelly helps turn the Print Works into a successful business asset. Vercetti also develops a soft spot for Kelly, due to his own father working in a print works when Vercetti was a child, and he begins to view Kelly as a father figure.[2]

A few weeks later, Sonny Forelli sends some hitmen to forcibly collect "their cut" from Vercetti's businesses. When Vercetti arrives at the Print Works, he finds Kelly has been attacked by the hitmen. Furious at the attack on Kelly, Vercetti orders some of the print workers to take him to the hospital, before going after the hitmen and killing them.[3]

Some time after the final mission, having killed both Sonny and Lance Vance for their betrayals, Vercetti receives a phone call from Kelly, who explains that he is recovering from his injuries and should be back at work soon. Kelly expresses his disliking for Lance, with Vercetti expressing his shock at Lance's betrayal, leading Kelly to quip, "Tommy, for a raging lunatic you sure are naïve". 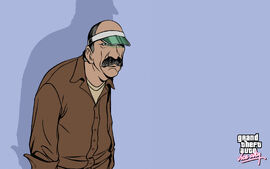