Standard White - 100%
“Every once in a while, a car breaks all the rules. It's cutting edge and timeless. It performs exquisitely on the road and effortlessly on the track. It perfectly embodies both your colossal vanity and your desperate insecurity. More than the sum of its parts, the ETR1 is the only car you will ever need to be able to afford again.”
— Legendary Motorsport description.

The Emperor ETR1 is a two-door endurance racing car featured in Grand Theft Auto Online as part of the Cunning Stunts update.

The vehicle's general shape and front and rear fascia is primarily based on the Lexus LF LC Vision Gran Turismo. The front fascia is based on the Gazoo Racing Lexus LFA, while the bodywork is based on a modified Toyota 86, namely the R&D Sport Subaru BRZ GT300 with minor styling cues from the Toyota FT-1 Concept. The spoiler, B-pillar and roof shape is similar to the Nissan GT-R Nismo GT3, taking the design of a touring car with a livery and several racing modifications.

The design of the car is very unique, featuring a carbon-fiber splitter spanning the whole width of the car and a large intake on the center, along with the manufacturer emblem above it. On the upper area, there is a thin grille on the center and curved headlights, composed of four square units and LED-like strips, placed in black housings. The hood features two small vents near the windshield.

The sides denote its bulky profile, featuring vertical intakes and air-flow exits on both sets of fenders, along with a single side-exit exhaust on the driver side, indicated by the heat shield around it. Around the greenhouse area, the pillars are finished in black and the rear quarter sections are covered by what appears to be fuel inlets, while a black, bolted-on plate covers the rear of the cabin.

The rear section features a large carbon-fiber spoiler placed on the rear of the vehicle, followed by the tail lights, the license plate and a lower exit vent. A 5-element diffuser can be seen at the bottom, with a single brake light on the center. Its underside is fully carbon-plated, which appears to be a single piece that includes both the front splitter and the rear diffuser.

The interior of the car makes use of steel flooring and sport seats with race seatbelts. The ETR1 includes various switches and buttons around the center console, and features a knob reading F/R, likely indicating a rear/four wheel drive locking diff. The steering wheel itself includes dual RPM indicators on the upper section, and a large extended gear-shifter is centralized on the console between the seats. Also, a radio is seen located under the dashboard, on the passenger side.

The primary color is applied on the bodywork, the interior stitching and the detail on the steering wheel that surrounds the badge, while the secondary color is applied on the inner side of the central intake, the inner sides of the bulky fenders, rear-view mirrors, roll cage, brake calipers and the center of the stock wheels. Like the RE-7B, the ETR1 features racing slicks with Atomic markings for the stock wheels, with the rims being similar to the "Endo v.1" rims available in Los Santos Customs, albeit using a permanent grey color and featuring a protruding center.

Both liveries have the same sponsors and only differs by the primary one (Kronos or Dense):

The car performs well for its type, surpassing the performance of many other cars in the Supers class. The vehicle has excellent traction thanks to its large spoiler, giving it large amounts of downforce when accelerating, as well as allowing it to retain speed in corners. The vehicle has a lower-revving engine compared to other endurance cars, but still supplies a large amount of power for its top speed. The engine sounds relatively powerful but certainly is not as high pitched as the RE-7B or Tyrus.

The engine model appears to be similar to that of the Sultan RS', sharing the same valve covers. The model has 3 pipes on each manifold, making it a V6 engine. It bears oil breathers and a fuel injection port to the left of the model, as well as cold-air pipes from the Rapid GT. Its engine sound is a higher-pitched variation of the one used in the Coquette, the Jester and the Jester (Racecar).

The ETR1 with no liveries. 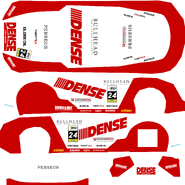 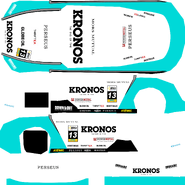 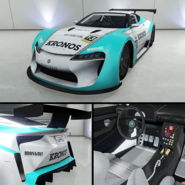 The Kronos ETR1 on Legendary Motorsport. 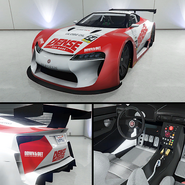 The Dense ETR1 on Legendary Motorsport.

The ETR1 on the updated Rockstar Games Social Club.

The ETR1 in a cinematic preview on Rockstar Games Social Club.