ERSE magazines are green in color and have a white title, a picture, and caption. An ERSE magazine can be seen on the coffee table in Tommy Vercetti's suite in the Ocean View Hotel, along with a vase of flowers, a New Discoverer magazine, a Crime magazine, a hockey mask (if The Job has been completed), and a magazine about Lance Vance. In the issue in Tommy's Suite, the caption reads "1986 sees best ever graphics", alongside what appears to be a screenshot from an early 2-D adventure game.

ERSE is a parody of Edge; they are both video game magazines and have identical wordmarks - the middle stroke on the E on both of their logos extend through the stem. 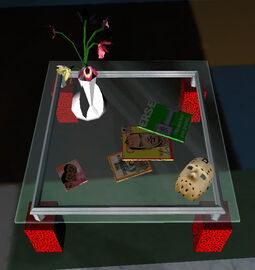 The coffee table inside Tommy Vercetti's suite at the Ocean View Hotel with an ERSE magazine visible.