@eColaSoftDrink
“The world leader in the manufacture and marketing of sugary caffeinated beverages that turn 8-year-olds into manic fatsos.”

eCola is a brand of soft drinks owned by The Sprunk Company, featured in both the 3D Universe and HD Universe. The player can buy stocks from them on the Lcn-exchange.com website in Grand Theft Auto V.

The drink reappears in Grand Theft Auto IV, where eCola vending machines, like those of Sprunk, may be used by the player to replenish their health - curiously, they only dispense cans of Orang-O-Tang.

There is an eCola store on the corner of Exeter Avenue and Uranium Street, East Holland, Algonquin and on Beaumont Avenue near the intersection of Guantanamo Avenue in Industrial. The player can also purchase an eCola background for Niko's Whiz Cellphone via Vipluxuryringtones.com. Yankee trucks may appear with an all-red eCola livery, complete with eCola logos on the sides.

A Radio Mirror Park station ID mentions that it is sponsored by eCola, which is now available in retro 1950s-style bottles.

eCola appears to be the main sponsor of the Triathlons as all start and finish arches are eCola branded.

The brand name is a play on both the E. coli bacteria and the Ebola virus. The company's slogan states that the drink is "Deliciously infectious!" which could suggest that the soft drink is contaminated, or more likely, that it is highly addictive, a reference to Coca Cola once containing cocaine.

It is also a possible reference to the Information Age, a time in which digital computer technology radically changed how information was being developed and shared in the late 20th century. It is also largely affiliated to the dawn of the Internet. During these years, Rockstar Games was also gaining notoriety for its highly controversial and unconventional franchise of Grand Theft Auto games. It was also a time of entrepreneurial companies frequently using the lowercase letter "e" as a shorthand predecessor to the names of their products and/or company names. The most prominent example of this trend is the term "email" which is short for "electronic mail".

The color and style of the eCola logo is an obvious caricature of Coca-Cola's logo. However, it does share some basic similarities with the Pepsi and Orangina logos as well. The eCola Light variant is also based on either Diet Coke or Coke Zero. 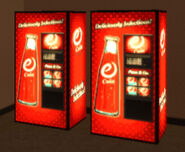 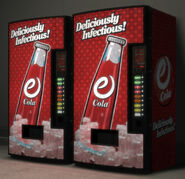 An eCola Vending Machine next to two Candybox machines 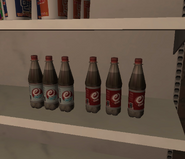 Bottles of eCola as seen in an internet cafe

An eCola Yankee in GTA IV

Advertisement in Korean in Little Seoul, roughly translating as pass it on. Below is the Korean name for eCola; "이 콜라" (I Kolla).

Vending machine at an Ammu-Nation.

A crushed eCola can in GTA V.

eCola soda cans at the back of Rob's Liquor in GTA V along with Captain's Log & Meteorite Bar chocolate boxes.

An eCola freezer in GTA V.

An eCola crate in GTA V.

An eCola can model. 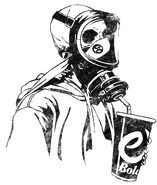 Graffiti of a skeleton man with a gas mask drinking a cup of eBola. 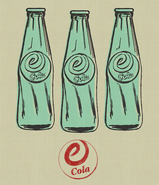 Deliciously Infectious, an artwork by Billy Wiener at The Diamond Casino & Resort, which is a parody of the Three Coke Bottles by Andy Warhol. 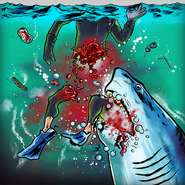 Another eCola Painting at The Diamond Casino & Resort.