Standard White - 100%
For the real-estate company, see Dynasty 8 and Dynasty 8 Executive.
“England. 1956. In just a few years' time, Weeny are going to produce the Issi, and the automotive equivalent of a quadruple shot low fat half caff flat white is going to change the world forever. But for now, they're still the world's most respected manufacturer of middle-of-the-road, middle-class, middle-income, about-to-get-fired-from-middle-management cars. The Dynasty is their magnum opus. And in 1957, they're going to sell the design, and the subcontinent is never going to be the same again﻿..﻿.﻿”
— Southern San Andreas Super Autos description.

The Weeny Dynasty is a 4-door vintage saloon featured in Grand Theft Auto Online as part of the continuation of The Diamond Casino & Resort update, released on October 17, 2019, during the Dynasty Week event.

The Dynasty is mainly based on the Morris Oxford III without quarter-rear windows and some minor tweaks, but features several details which reference its Indian counterpart, the Hindustan Ambassador, which itself is essentially the same car with minor alterations. The front end appears to be a combination between the Hindustan Ambassador and the Morris Oxford Farina (especially the turning lights within the grille), although one of the grille options available in mod shops resembles the front end of the Morris Minor. The rear end, rear fenders and wheel design share similarities to those on the Checker Taxi, with slight styling cues from the 1954 Hudson Hornet. Multiple modifications available for the Dynasty reference different evolutions of and the culture surrounding the Hindustan Ambassador, such as plastic-extended bumpers, numerous liveries and a taxi sign.

The Dynasty features a simplistic bodywork with various classic details; the front features a traditional chrome bumper with small overriders on the outer sides and a large chrome grille with horizontal dividers, along with turn blinkers on the outermost sides of the grille and large headlamps on the upper edges with chrome detail around. The bonnet has a bulged profile with what looks like a chrome ornament on the centre, while the area near the windscreen has two chrome hinges.

On the sides, the car has slightly bulged sections around the front and rear portions, as well as slight flares at the bottom and on the wheel arches. The doors also have horizontal handles and square-shaped mirrors mounted near the A-pillars of the cabin, which are finished in chrome. On the cabin area, the window trims and the inner separations of the front doors are also finished in chrome, while the rearmost pillars are curved in comparison to the frontal ones. Directly behind the cabin are two chrome hinges for the boot and a gas cap on the passenger side.

On the rear end, the upper edges of the car have dual tail lamps with chrome details around, each one consisting of upper main/brake lamps and lower, smaller turn blinkers. The centre of the boot has chrome detail just above the number plate, which also bears the Weeny logo on top. The bottom area has a chrome bumper with overriders near the quarter-rears of the car. A single exhaust tube can be seen on the passenger side, just below the bumper.

The interior of the car reuses the same dial set and wooden details from cars such as the Roosevelt and the Stafford. However, the dials are arranged in a way that the speedometer and tachometer are located between the steering column and the centre of the whole interior (most cars with this set usually have both main dials centred around the steering column). Various wooden panelling can be seen on the dashboard and around the radio set, with a chrome trim around it, and a glovebox compartment is present on the passenger side. The doorcards and the floormats are finished in grey leather with chrome details, and the inner side of the roof is finished in white.

The bodywork, part of the interior, and the rims are painted in a primary colour, while the cabin area and the dashboard are painted in a secondary colour. The stock wheels are rather unique, with the rims having four open sections around and a grey circular centre, wrapped in medium-profile tyres. Said rims sport a darker shade to the selected primary colour.

The performance of the Dynasty is quite underwhelming in comparison to most sedans, possibly attributed to its ageing nature. Its acceleration is rather sluggish and top speed is inferior to vehicles such as the Cheburek, but this results in generally good handling and braking. The suspension is relatively good for traversing bumpy roads and kerbs but is still a poor choice for dirt roads and off-road environments in general, as its traction is worsened, thus reducing acceleration rate and braking effectiveness.

The Dynasty has one (the eleventh) Advanced Flag enabled.[1] The purpose of this flag is unknown, but it appears to have little impact on performance.

The Dynasty is powered by an inline-4 engine, coupled to a 5-speed gearbox in a front engine, rear-wheel-drive layout. Its engine sound is high revving, resembling the sound used on most speedboats in the game.

Installing any "Deflector" modification will increase its traction slightly, in the same way as a spoiler. 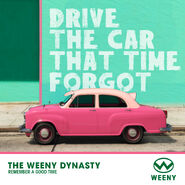 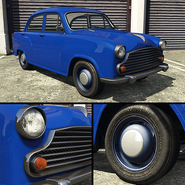 The Dynasty on the updated Rockstar Games Social Club.

The Dynasty in the cinematic preview on Rockstar Games Social Club. 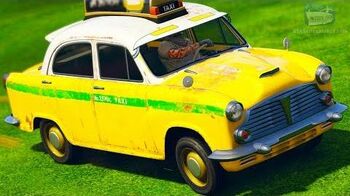