Devin Richards
“Shit is fucked up, man. Sometimes I just wanna end this shit. Just... bam. But I ain't there yet. Not quite.”
— Dwayne Forge to Niko Bellic in Ruff Rider.

Dwayne Forge is a main character and an optional friend in Grand Theft Auto IV.

Dwayne was born in 1973 in North Holland, Liberty City. He grew up in the Westminster Towers, a notoriously violent and drug-infested housing project in North Holland. His father was an illiterate, violent pimp and drug dealer who regularly beat both Dwayne and his mother. He would tell Dwayne in a harsh voice: "Expect the worst, then you can only be pleasantly surprised" before beating him, accounting for his melancholic outlook on life. His mother was his primary caregiver, who he thought highly of, saying she "tried so hard" to please his father, who often beat her. On one occasion, she bought him some golf clubs because a friend of his had some and it seemed "sophisticated", but he instead broke the clubs over her back. His father was killed on his doorstep when he tried to rip off other drug dealers in the neighborhood. Dwayne says that he "felt nothing" when his father was murdered, even saying he was "glad". Dwayne aspired to be a police officer as a child, but says he could not read well enough and that the LCPD discriminated against black police officers in the 1980s. At one point, he was homeless, unable to get a job without full education. From there, Dwayne reflected on his only marketable skills, stating "I could add up and I could scare people, so I started selling dope."

Between 1988 and 1999, Dwayne ran a crack cocaine empire. Dwayne claimed that he made $50,000 per week and "had apartments full of money - entire apartments stuffed with bank notes!" Because of his connections, Dwayne had more pure product than anybody in Algonquin at that time. He was living the dream as a teenager, riding high as a drug lord. However, with his new success also came problems. A lot of people were jealous of Dwayne because of his fast money and street fame. This caused Dwayne to constantly seem very distant and to only remain close to a few people. Two of those people closest to him were his girlfriend Cherise Glover, who he describes as "the love of my fucking life", and Trey Stewart, also known as Playboy X, his prodigy. Despite his immense wealth, Dwayne states that he was miserable, feeling paranoid and angry - possibly due to the jealousy of others. Dwayne stated that he wanted to start a family and have children, but believed his drug dealing past and stint in prison had prevented it. Dwayne also invested in the adult entertainment sector and bought The Triangle Club in Bohan, and a couple of pornography shops in Liberty City and Alderney City.

In the late-1990s, following a tip from an informant, Jayvon Simson (who would also steal his girlfriend in the next few years), Dwayne was arrested and sent to prison. Dwayne ran the gang from prison at first, also providing for his girlfriend Cherise, giving her "cars, houses, apartments, bank accounts, everything!" whilst inside. He states that during his time in prison, he underwent therapy and was placed on suicide watch for much of his prison sentence, continuing to express some suicidal thoughts when released. Upon reflection, Dwayne harbours mixed feelings about his former drug empire, he states that "it was sort of fun, and sort of like living in hell; seeing your old school mates turn into zombies, and knowing they was going to be your best customers". He admits that he knew what he was doing was wrong, but felt like he didn't have a choice due to his lack of money and education.

Playboy X assumed leadership of the empire around this time, as many gangs matured from solely crack sales to wider drug sales, other organized crime and even legitimate venues such as the music and real estate industries. Playboy last visited Dwayne in prison in 2004, no longer having any interest in running with him. During this time, the Triangle Club was taken over by the Trunchez brothers. Dwayne states that when he was arrested, the authorities offered him various deals in exchange for information on other dealers. Dwayne refused, saying that when he dies, he can "meet his maker knowing that he never ratted anybody out".

In 2008, Dwayne is released from prison and immediately goes to see Playboy at his penthouse. He talks to Playboy X and Niko Bellic in the mission Deconstruction for Beginners, where Playboy patronizes him. Playboy X eventually pays Niko to appease Dwayne by working for him, but Niko genuinely connects with Dwayne, as they both experienced hardship and developed a cynical outlook on life and distrust for others.

With Niko's help, Dwayne gradually begins to rebuild his life. He asks Niko to kill Jayvon Simson, the man who stole Dwayne's money and his girlfriend. Niko finds him and Cherise, and chooses whether or not to kill Cherise before chasing and murdering Jayvon. Niko meets up with Dwayne at Cluckin' Bell, and gives him the money back.

However, Dwayne also begins to trash talk Playboy, and Dwayne's re-acquisition of the Triangle Club conflicts further with Playboy's business interests. Dwayne knew the effect that this would have on Playboy, doing it anyway out of passive-aggressive anger for turning his back on him. According to Playboy, he offered Dwayne half of his old gang back and he did not accept the offer, likely insulted as he founded the gang and taught Playboy the business.

Niko is subsequently hired by both men to assassinate one another, in the mission The Holland Play. Niko must choose whether to kill Dwayne or Playboy X.

If Niko chooses to kill Dwayne, Niko will respectfully tell Dwayne that it's "nothing personal." Forge accepts his fate in sorrow, turning his back to Niko and calling him "fake, just like the rest of them!" Niko then shoots Dwayne in the back of the head while turned away, killing him with visible regret. Playboy pays Niko, but, in apparent denial, calls him "cold" for assassinating his old mentor, and the pair never speak again.

If Niko chooses to kill Playboy, Niko will arrive at Playboy X's Penthouse to kill him. When Niko is telling Playboy that he didn't change the game, he executes Playboy by shooting him in the neck, saying that the game changed him. Dwayne takes over the North Holland Hustlers once again and gives Playboy's penthouse to Niko, revealing that he had the deed to it all along, and when told that he should take it by Niko, mentions that living in it would remind him too much of Playboy, who he states he "should have kept a closer eye on". He will also become a friend, and, if his friendship's "like" percentage is raised high enough, he will send two gangsters as bodyguards whenever Niko needs backup. If Niko and Dwayne get drunk during a friendship activity, Dwayne may confess that he killed Playboy because was too jealous of his success.

Dwayne is bald, of large build and has a beard. He wears a black leather jacket over a white shirt, with jeans and boots.

During their friendship activities, Dwayne tells Niko about his life and at first presents very negative outlooks, reflecting his squalid living conditions and isolation after his release from prison. At this time, he describes himself as having forgotten how to care about life, showing his depression and nihilism. However, after enough activities with Niko, Dwayne begins to act more positively and after Niko himself tells him to stop complaining and try to enjoy life, Dwayne finally begins to share some positive outlooks and hopes with Niko.

Despite being a drug dealer, Dwayne often shows signs of moral integrity, extreme kindness, and altruism, especially to those closest to him. While incarcerated he pulled favors to make sure that his girlfriend on the outside was looked after and taken care of, even going as far to lavish her with cars and apartments and bank accounts while simultaneously not taking deals from law enforcement which would have betrayed his allies. Dwayne took in Playboy X and served as a father figure to him, teaching him how to sell drugs and helping him build a criminal empire. If Niko chooses to kill Playboy X, Dwayne shows genuine sadness over his death, lamenting that he was "a good kid back in the day".

Dwayne appears to like hip-hop music, as his favourite radio stations are The Beat 102.7 and The Classics 104.1. He may also like The Vibe 98.8, as it plays inside his apartment.

If Dwayne is spared in The Holland Play, he will send Niko an email. If Niko responds positively, he and Dwayne will become friends.

The possible activities with Dwayne are: Drinking, Eating, Bowling, or going to a Strip Club. He likes classy places like the Superstar Café, however still loves Cluckin' Bell. His nightspot preference is Club Liberty in Northwood, Algonquin.

Dwayne does not like it if Niko drives too fast. He highly dislikes helicopters, so it is advised not to pick him up with one. However he likes the NRG 900 very much.

Dwayne's friendship activities do not count towards 100% completion.

Getting Dwayne's 'like' percentage over or equal to 90% counts towards the "Liberty City (5) achievement / trophy if he is spared during The Holland Play. 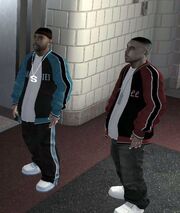 When Dwayne's 'like' percentage is high enough, he will send two goons to back Niko up when requested. One of them carries a Pistol while the other carries a Micro-SMG. They will stay close to Niko and fire on every hostile enemy.

They will stay with Niko for around 10–15 minutes until he says that he wants to be alone again. If Niko does not drop them off in about a minute they will bail out of the vehicle. If Niko leaves them behind, they will disappear when they get too far away.


- Placed on suicide watch for much of his time in federal penitentiary.
LIBERTY CITY POLICE DEPT.
PROTECTING LIBERTY CITY 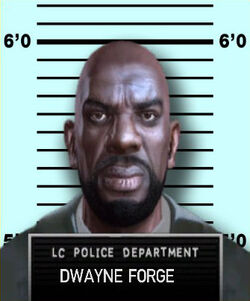 WANTED FOR
Possession: Intent to Sell 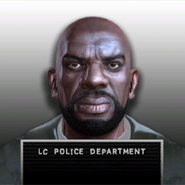 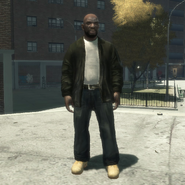