A_M_Y_Salton_01
For the similarly named plane in GTA San Andreas, see Cropduster.
““Antique” and “open cockpit” aren't normally the first words on your wishlist when you're shopping for a private jet, but this might change your mind. Produced during the 1930s and 1940s when America still made things, this famous biplane was used primarily for crop dusting chemicals into the food chain. As you swoop through the sky, middle-aged combover fluttering in the wind, you'll almost be able to taste the pesticide blowing back in your face.”
— Elitás Travel description.

The Duster, as its name suggests, is an open cockpit tandem biplane intended to spray pesticides over a large area in a small amount of time. The plane resembles a Stearman PT-17 modified for crop dusting, with the vertical stabilizer and cowl of a Stearman 4.

This biplane only spawns in a rusted form, likely because it is considered an old vehicle. It also has a spraying system underside.

The Duster features a primary color for most of its body and wings, while the secondary color is applied to the nose, sides and large frames connecting the wings. The V-shaped stripes on the upper side is classed as the "wheel" color, though only one color set has a differing secondary and wheel colors.

The Duster is the slowest fixed-wing aircraft in the game, but it makes up for this by possessing good handling abilities. It needs a long runway to takeoff, as it takes about 7 seconds.

Although the real-Life PT-17 features a dual-seat control system for training, the in-game GTA Online Duster's passenger cannot take rein if the pilot bails out. Spraying pesticide into the face of another player or a pedestrian would not harm them, or attract any attention from the police.

The Duster's engine appears to be a radial engine, evidenced by the eight cylinders seen behind the main propeller and mounted around the engine's crankcase.

Upon being converted into a personal aircraft, the Duster can be repainted with a primary color and a secondary color. However, the V-shaped stripe on the upper side cannot be changed, therefore the player may require more than one attempt to get a desired color.

A Duster seen in the first trailer.

A Duster seen in Trevor's Trailer.

Another view of the Duster.

A Duster flying over Marlowe Vineyards in GTA V.

A Duster flying over Zancudo River.

A Duster in the enhanced version of GTA V. Note the red and yellow paintjob. 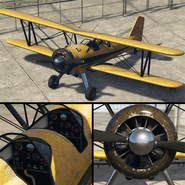 The Duster on Elitás Travel.

A freshly landed Duster at McKenzie Field with the NPC pilot walking away.

The Duster on the updated Rockstar Games Social Club.

The Duster in the cinematic preview on GTA V Rockstar Games Social Club.

The Duster in the cinematic preview on GTA Online Rockstar Games Social Club.