• ­Get a vehicle and go to the Civilization Plaza.

• ­The helicopter is leaving, track it to its destination.

• ­Let the helicopter land, then move in to take it.

• ­Fly to the dropoff point on the south side of the Airport.

Portrait of a Killer
Have a Heart

"To me? Who am I? There's a hundred guys in this building alone who fit my description. Middle aged men, paunchy, glasses...You bring them here? What's this? Empty office, leased to a guy who died in the last days of Vietnam...Call me up. My number never existed. No. I'm not too worried about that."
— U.L. Paper Contact, about being caught

Dust Off is a mission in Grand Theft Auto IV given to Niko Bellic by United Liberty Paper.

The United Liberty Paper contact wants the Russian businessman Eduard Borodin dead. The only way to reach him is through the air, so he sends Niko on a deadly mission to chase the helicopter. Niko finds the target chopper and follows it to the meeting place in the Western Algonquin docks. Bellic gains cover and ambushes the meeting, killing all the members including the chopper driver, allowing him access to the helicopter itself. Niko flies it to Francis International Airport in Dukes and lands it next to the Cargo Yard where the Company's mechanics collect it to install a rocket launcher.

After a meeting with United Liberty Paper, Niko gets a car and goes to the Civilization Committee. A helicopter will take off. Niko follows it. The player is on the expressway and should have a clear view of it.

After a long chase, the helicopter will land near the sports plaza in Westminster, Algonquin, where six armed men will stand guard, and two men will be at the entrance to a dock leading to the landing pad. Niko fights and kills all of the armed men and steals the helicopter.

He flies the helicopter to Francis International Airport, but when the helicopter is about to take off, a final goon will run at the helicopter, grabbing onto the leg and trying to prevent the player stealing it, yet he will fall to his death as the player hovers or the player crushes him with the heli. Two FIB agents will collect the helicopter and his mechanics will install a rocket launcher inside.

A few in-game days later, the U.L.P.C. will call the player stating it's ready again and the next mission will start. 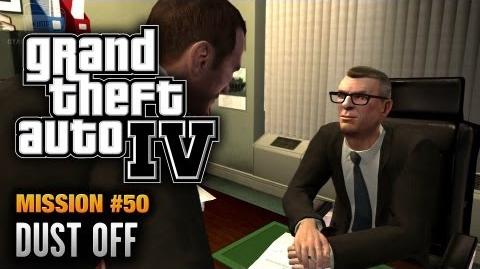 Retrieved from "https://gta.fandom.com/wiki/Dust_Off?oldid=1322540"
Community content is available under CC-BY-SA unless otherwise noted.