Dusche Gold is a German alcoholic beverage that appears in the HD Universe of Grand Theft Auto.

The beer's name is a German language pun on the term "golden shower" (the act of urinating on someone); the German word dusche can be translated as "shower" or "soak," and one of the product's slogans is "Let it rain...".

Due to the Gold name and yellowish orange colour of the drink, Dusche Gold is very likely a Pilsner beer.

The beverage can be found in some liquor stores, such as Rob's Liquor.

Dusche Gold is very likely based on Reissdorf Kölsch and Warsteiner in typeface design and the colour scheme, respectively.

The motorsport liveries in Grand Theft Auto Online are primarily based on the iconic orange racing liveries of Jägermeister. This is likely just because of the similar logos, because Jägermeister is a digestif and not a beer like Dusche Gold.

The six vehicles with the Dusche liveries are: 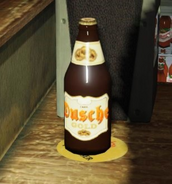 A neon Dusche Gold sign outside a store in Los Santos.

A bottle of Dusche Gold Beer.
Add a photo to this gallery
Vehicle sponsors

An R88 with a Dusche Racing livery in Grand Theft Auto Online. (Rear quarter view)
Add a photo to this gallery

Retrieved from "https://gta.fandom.com/wiki/Dusche_Gold?oldid=1282959"
Community content is available under CC-BY-SA unless otherwise noted.