No
“This armored buggy comes with a lightweight machine gun turret, so conflict over who gets the wheel and who gets the trigger is both inevitable and enjoyable. Weapon customization available in the Mobile Operations Center or the Avenger.”
— Career Builder description.
“History shows that where an army fails, a surgical strike can suceed. All you need is a couple of well-drilled sociopaths, a fresh batch of experimental drugs, a cache of depleted uranium munitions, and a lightweight, armored sandrail with a machine gun bolted to the dash. We can't officially comment on the rest, but we can assure you the Dune FAV is going to be all the transport you need.”
— Warstock Cache & Carry description.

The BF Dune FAV (Fast Attack Vehicle) is an armed variant of the Dune Buggy featured in Grand Theft Auto Online as part of the Gunrunning update.

The buggy appears to take strong inspirations from the Desert Patrol Vehicle (formerly known as the "Fast Attack Vehicle"), although with a standard cabin instead of having a rear section for the rear gunner.

The Dune FAV is essentially a Dune Buggy modified for combat purposes. While sharing the initial buggy design, the front features an additional frame bar behind the lights, while the upper front area is less angled than the Dune Buggy and has an extended panel on the driver side and a cut-out for the passenger-side turret. The sides of the vehicle feature extended racks to carry additional equipment, while the cabin features a higher, flatter profile, an additional front frame and a solid roof panel. The rear section is more or less identical to the Dune Buggy, but the rear frames are more slanted and features a solid plate covering the rear end and the engine bay. Its underside is also similar to the Dune Buggy, but features a sump guard below the engine. The vehicle features an extensive amount of equipment on the front, sides and rear, consisting of a shovel and axe kit, duffel bags, ammo boxes, Jerry Cans, a spare wheel and a strapped antenna on the driver side, as well as a Carbine Rifle on the driver-side frame and a Combat MG on the passenger-side one.

The occupants' section retains the same features as the standard Dune Buggy, but features an additional support for the turret mount, while the passenger side of the cabin frame is moved downwards to leave extra room for the gun. The wiring for the radio set is also readjusted in line with the frame below the turret gun.

The vehicle is equipped with a Shrewsbury 7.62mm MG, which can be replaced with either a Shrewsbury 40mm Grenade Launcher or a Coil 7.62mm Minigun. 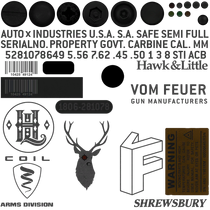 The Dune FAV appears to have better top speed and acceleration than the Dune Buggy, while retaining the general handling and the off-road capabilities. The Dune FAV can also lean easily in mid-air jumps, allowing for quick recoveries. However, the lack of armour makes the vehicle vulnerable against collisions, firearms in general and explosives, and the lack of armour plating on the cabin renders the occupants vulnerable to gunfire.

Like the Dune Buggy and many BF offroad vehicles, the Dune FAV is powered by a single cam Flat-4 engine, coupled to a 5-speed gearbox in a rear engine, rear wheel drive layout. Its sound appears to be a louder variation of the one from the Dune Buggy and the Injection.

The gunner has access to a dashboard-mounted turret that gives limited motion range, with a rotation angle of about 90 degrees (45 for each side) and an elevation angle of about -10 to 30 degrees. If alone, the drive can easily switch between the driver seat and the gunner seat when stationary.

The Dune FAV can only be modified at a Vehicle Workshop inside a Mobile Operations Center, Avenger, or Arena Workshop.

The vehicle in the convoy, escorting the Mobile Operations Center.

Loaded in the rear of a MOC.

A yellow Dune FAV, shown in the promotional concept art.

Close up shot of the Dune FAV, from the official trailer. 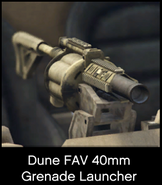 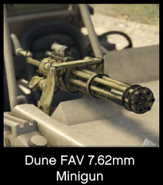 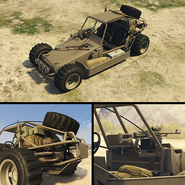 The Dune FAV on the updated Rockstar Games Social Club.

The Dune FAV in the cinematic preview on Rockstar Games Social Club. 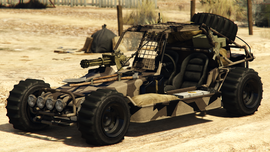