“This custom dune buggy is about the most fun you can have with your clothes on. Or off. It is designed for the beach after all. The ultimate toy for the big kid with a lot of disposable income.”
— Southern San Andreas Super Autos description.

The Dune Buggy's construction is a tubular frame chassis and is extremely lightweight, with an overall appearance reminiscent of the Bandito from Grand Theft Auto: San Andreas.

The vehicle features a long body design with a mostly stripped-down appearance, where the front area is narrower and features a set of four circular lamps over the protective frames. The cabin area is wider in appearance and lacks any sort of doors or windows, having only two frames over the occupants' section. The rear area consists of a squared-off frame on the rear end and two angular ones passing over the engine bay.

The underside area mostly consists of two steel floor panels and the suspension systems, where the front one features dual suspension arms, while the rear one features articulated arms with axle shafts connecting the engine with the rear wheels.

The cabin compartment features the corresponding set of pedals, a steering wheel with a visible steering column and reaching the steering arms, the gear stick connected to the engine and the main seats. The Dune Buggy is also fitted with a CB radio, and occasional trucker chatter can be heard regardless of whether the main radio is turned on or off (it only plays if playing as Trevor and in Blaine County).

The vehicle may spawn either with or without body panels covering the front and sides, as well as a small canvas on top, resulting in four different variations. The vehicle can only be painted with a primary colour for the body panels. The secondary colour, although not accessible, appears to be applied on the roof canvas (which is set to spawn in a black colour), though it is barely noticeable due to the faded texturing of the same. It uses a set of wheels also shared with the Injection, being five-spoke rims fitted with standard treaded tyres on the front and wider dust tyres on the rear.

The Dune Buggy performs generally well both on the road and off. Its extremely light weight allows for excellent acceleration, which complements a decent top speed. Its length and relatively narrow wheelbase keep it steady during turns, and retains fairly decent grip even at high speeds. It is also quick to recover from jumps, rollovers and minor accidents, but is quite fragile to withstand collision damage. Furthermore, the open cabin makes the occupants heavily vulnerable to gunfire.

The Dune Buggy is powered by a single-cam, Flat-4 engine that is also shared with the Injection, coupled to a 5-speed gearbox in a rear engine, rear wheel drive layout. The engine also emits the same sound as that of the Injection, being a low-revving and loud sound, possibly attributed to its worn condition.

First appearance of the Dune Buggy in Trailer 2.

A Dune Buggy without body panels.

The Dune Buggy on the updated Rockstar Games Social Club. 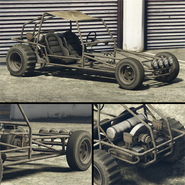