View source
watch 02:30
Dead Cells Final DLC - The Loop
Do you like this video?
Play Sound
For the vehicle also named "Dune" in the files, see Dune Buggy.

Standard White - 100%
“It's probably never occurred to you to enter an offroad marathon in 20,000 pounds of turbo-charged box truck. But now you know everything you need to, it's clearly a fantastic idea. Trust your instincts.”

The Dune is an off-road rally truck featured in Grand Theft Auto: San Andreas and Grand Theft Auto Online, the latter as part of the Cunning Stunts update. It is manufactured by MTL in the HD Universe.

The Dune is designed as an off-road racing adaptation of a large cab-over truck, with a design that is similar to endurance trucks competing in long-distance desert rallies, such as the Kamaz 4911 rally truck.

The Dune is outfitted with improved suspensions, off-road tires, five running lights and rollbars, as well as a two-tone color scheme composed of a primary one on the front half and a secondary one on the rear half, with striped of alternate colors around the middle. Like most trucks in the game, the Dune is only capable of carrying two occupants.

The Dune returns in Grand Theft Auto Online with the same appearance and purpose as in GTA San Andreas, but with a design that is heavily based on the MAN TGS range, specifically the Dakar MAN TGS 480.

The Dune is essentially a rally truck adaptation of the Brickade, using an identical cab. However, the rear module is replaced by a rear unit for spares, as well as a shorter wheelbase and lower ride height.

The front of the vehicle retains most of the features from its 6-wheeled equivalent, being the large bumper with the same headlights and the protective frames from the windshield area to the roof. However, the overhang of high-beam lights was moved to below the windshield, while the sunroof and the dual set of trumpet horns on the roof were replaced by a plain cover and various protective frames. The sunshade is also absent in the Dune, in favour of a permanent windshield banner, along with rally nets on the door windows. The dual rear-view mirrors are now finished in the primary color instead of black.

The rear unit is depicted with a more flattened and sectioned appearance, with what appear to be intakes leading through the same for aerodynamic purposes. The underside of the unit slightly ascends from the bottom level of the cab to around the half of the rear wheel arches, followed by a slightly steeper shape towards the rear end. Said arches have black/CFRP flares and rear mudguards.

On the rear end, the Dune features square tail lights on the lower side, as well as a small curved shape, the marker lights and the reverse lights on the upper side. Because of the sloped rear, the rear axle is mostly exposed. The vehicle employs the same heavy-duty wheels with the same tread pattern as the ones on the Brickade.

The Dune employs the same color distribution as the Brickade, applying the primary color on the upper side and interior stitching, as well as the secondary color on the lower side. When purchasing one on Southern San Andreas Super Autos, the Dune is fitted with one of the two liveries, being a Globe Oil livery and a Fukaru livery. None of them cannot be removed, as it is a Pegasus vehicle, therefore it is only possible to remove the livery through the Content Creator or using trainers.

The four wheel drive Dune features a powerful engine, and as a result, is remarkably good when negotiating off-road terrains, being more than capable of climbing up inclines where most vehicles would have more trouble traversing. Its superior grip enables it to climb the steepest grassy inclines even in the rain, something lesser off-road vehicles such as the Huntley or FBI Rancher cannot. In fact, the Dune can beat even the Monster Truck when it comes to climbing slopes covered with grass or sand while it is raining. It has one of the best torque-to-body weight ratio among the off-road vehicles in Grand Theft Auto: San Andreas, even better than the Patriot or Sandking. Its acceleration is powerful. However, its high center of gravity makes the vehicle unstable when tilting sideways, so caution must be exercised when driving the vehicle along bumpy terrain. The truck's soft suspension helps greatly in 'gliding effortlessly' across hills, as well as easing cornering.

While the Dune is ideal for off-roading, it has reasonable performance on tarmac surfaces as well. The speed and acceleration of the Dune is very good, similar to some low-class sports cars (Premier, Elegant, etc.). Braking is very good because of the soft suspension and high shocks. At high speeds, the truck is very stable and is very light for its size, definitely worth the effort of the Kickstart event. The Dune can also hit various vehicles very hard because of the shocks.

The Dune is a great choice for off-roading; what it is made to do. It has excellent off-roading abilities, traction and maintains power and speed up hills. On the downside, its extreme height and raised suspension mean the vehicle is one of the worst vehicles for tipping over (but only if driven over curbs or objects without taking precaution) - it is by far the tallest and narrowest vehicle in the game with raised suspension, and is the most prone vehicle for tipping over. Driving over a small incline at one side of the road may cause the vehicle to drive on two wheels, and steering can often cause the vehicle to become more likely to tip over. Maintaining the vehicle on two wheels is achievable, and once the vehicle begins to sit on all four wheels, it usually rebounds in the other direction. This type of suspension has benefits, however. It allows the vehicle to crawl over rocks with no trouble unlike other off-road vehicles, but unfortunately the lack of independent suspension means it will lean significantly - it can be seen that the vehicle features a single axle rather than two independent axles and suspension arms. The truck has great take off thanks to the unbeatable traction and four wheel drive system. The durability of the truck remains the same as the Brickade. In terms of weight, it seems a lot lighter than said vehicle, and thus is excellent and crawling up hills and achieving high speed instantly.

The Dune is stated to be powered by the same 24-valved supercharged engine as the Brickade and other similar vehicles, according to the badges. The engine sound is rather powerful, similar to a combination of muscle cars and is shared with the Armored Boxville. The engine is located under the cab and powers all four wheels. Because of the raised suspension, the driveshaft does not actually connect to the diffs, instead, it is connected to chassis directly above the diff and axle. 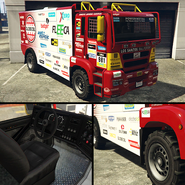 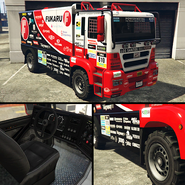 The Dune on the Rockstar Games Social Club.

The Dune on the updated Rockstar Games Social Club.

The Dune in the cinematic preview on Rockstar Games Social Club.