"There's something about driving a vehicle with wheels that are bigger than you. The HVY Dump doesn't let traffic get in its way, and sports a box-bed with an 80-ton capacity. That's a whole lot of migrant workers."
―Warstock Cache & Carry description.

The Dump is a large vehicle, being one of the, if not the largest land-vehicles in the entire Grand Theft Auto series. It has many realistic details, some namely being front ladders and stairs, fire extinguishers and its wheel and tyre tread design. One exception to this is a large metal bar protruding from the side of the truck, which the player uses as a means of entrance.

The truck could be based on multiple CAT dump trucks, but takes most design from the CAT 789C.

The vehicle is reminiscent of the Dumper from Grand Theft Auto: San Andreas, albeit more modern in appearance and with a similar layout (cab on the left side, large wheels and a large tipper on the back). It always spawns in a yellow/black color with a worn appearance, with the rear tipper always covered in dirt.

As expected from such a large, both wide and tall vehicle, the Dump is one of the slowest vehicles in GTA V, beaten in slowness by the Dozer and Mower. However, the truck makes up with its power against other vehicles; its sheer size allows it to crush other vehicles, albeit with some struggle and bounce, or push them out of the way with ease. The truck's high exhaust stack also allows it to travel in very deep water without the risk of cutting out.

Despite the vehicle's brute size and shape, the vehicle's durability remains the same as any other vehicle, if not worsened by its vulnerability. The Dump's tires can deflate and burst, and the vehicle cannot withstand even one explosion before exploding completely. It should be noted that while crushing vehicles, cars will commonly explode under the sheer weight of the truck, which can often cause the Dump itself to explode. The large fuel tanks are also vulnerable to gunfire and its slow speed makes it difficult to get out of sticky situations.

The Dump can also be picked up by the Cargobob's hook, despite its weight, although its size again poses a significant threat to both the control and the speed of the helicopter. 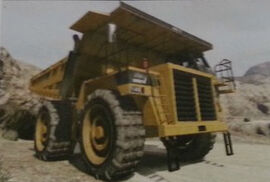 Front view of the Dump.

Rear view of the Dump.

Retrieved from "https://gta.fandom.com/wiki/Dump?oldid=1207533"
Community content is available under CC-BY-SA unless otherwise noted.