The Dukes is the quintessential American muscle car: aggressive 1970s styling, a large engine, and a low, roaring exhaust note. It appears to be chiefly modeled after the 1968-1970 Dodge Charger, while the front bumper appears based on the 1968 or 1969 Pontiac LeMans or the 1967-1969 Firebird. The Imponte name can also be found on the right grille of the front bumper, similar to the Pontiac name found on the 1967-1969 Firebird. The tail lights resemble those of the 1970 Mercury Monterey. The body styling takes cues from many Dodge and Pontiac cars of the 1960s and 1970s.

While the Dukes does not appear in the original version of GTA V (prior to its appearance in the enhanced version), the player can modify their vehicle's wheels by selecting the Dukes wheels in Los Santos Customs. The car is also mentioned in the police scanner files under the filename "0x09223C6C," meaning it was possibly considered to appear in the original game. It also makes a brief cameo in TV, where an advertisement for the Cunning Stunt Academy features two Dukes on the logo.

The Dukes returns almost unchanged performance wise, the most noticeable change is the handing line, which, as with all other cars in GTA V, has been stiffened to make the car quicker at reacting to movement. The car's stability has also improved, but not enough for it to softly land after even the smallest of jumps. Acceleration has also greatly improved partially because of the handling fixes, which minimizes any threats on the power-to-weight ratio. 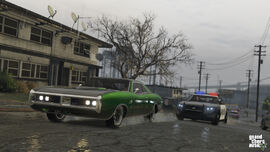 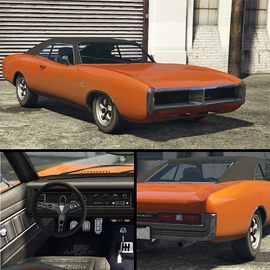 As a possible parody of Dodge's Super Bee, a "Highway Reaper" version can also be found, featuring a large supercharger with a bug catcher, "Highway Reaper" decals on the rear quarter panels, a chin spoiler mounted under the front bumper, (nonfunctional) hood pins, and wire mesh covers over the grille and headlights. These modifications are also found in Grand Theft Auto V from Los Santos Customs, although the sticker on the rear quarters are only applied with the "Stunt Cage" modification. 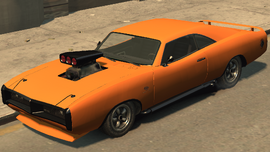 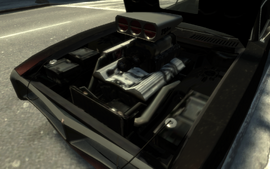 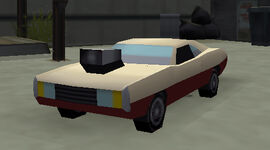 Retrieved from "https://gta.fandom.com/wiki/Dukes_(car)?oldid=1176380"
Community content is available under CC-BY-SA unless otherwise noted.