Duke O'Death Week was an event in Grand Theft Auto Online. The event started on April 18th, 2017, and ran until April 24th, 2017. This event featured a new vehicle, double earnings in various missions, and discounts on selected vehicles, properties, and other items. Six vehicles and the Hatchet are now available for non-returning players, while returning players can get them for free. All of the bonuses and discounts continued into the Tiny Racers Week. 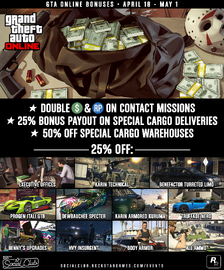 Retrieved from "https://gta.fandom.com/wiki/Duke_O%27Death_Week?oldid=1135383"
Community content is available under CC-BY-SA unless otherwise noted.