GTA Wiki
Register
Don't have an account?
Sign In
Advertisement
in: Pages with unclear information, Vehicles, Vehicles in GTA V,
and 10 more
English

No
“Is it an SUV? Is it a muscle car? Is it serious military hardware for the oligarch market? It's all of the above with six wheels and a bulletproof shell (if you pay for the extras). No dictator or business leader should be seen without it.”
— Warstock Cache & Carry description.

The vehicle is essentially an off-road variant of the Dubsta, where the chassis has been enlarged to accommodate the extra axle, and has a higher ground clearance to make way for the bigger off-road purpose tyres. The cabin features smaller rear quarter windows and compartment, while the rest of the car has a truck bed fitted with load bed roll bars as standard (albeit a smaller group). It is also equipped with skid plates at the front and rear.

Colour distribution is similar, where the primary one is applied to the body (while the stitching remains white) and the secondary one is applied on the front bumper, arches, bottom sides, roof, and rear bars. Its stock wheels share the same rim design as the off-road/Merryweather variant of the Mesa and the Sandking XL, sharing the rim design with the "Six Gun" muscle wheels available in Los Santos Customs.

As expected from a large 6-wheeled truck, the Dubsta 6x6 is exceptionally heavy, however it is a very stable vehicle. The Dubsta 6x6 retains the same engine model and sound used in the regular Dubsta. It is stated to be powered by a large supercharged V12 engine, however it is fitted with a modelled turbocharged straight-4, coupled to a 6-speed transmission, which is capable of powering the vehicle up steep slopes with relative ease. Just like the Seminole, Habanero and Huntley S, the Dubsta 6x6's engine features a modelled turbocharger. This is purely cosmetic and does not affect performance, unless the player purchases a Turbo modification at Los Santos Customs.

Its top speed and acceleration are quite impressive (being superior to all Off-Road classed vehicles), but handling leaves much to be desired, as it has a large turning radius due to its long wheelbase. It understeers when off-road and/or when at high speed. Braking is also sub par, with upgrades doing little to improve it.

Durability is excellent, as it is able to withstand many head-on collisions before the engine fails. The 6x6 can easily push smaller cars off the road and it can withstand large amounts of gunfire. Bulletproof tyres are highly recommended as for its handling not be hindered by gunfire from its large, exposed tyres. Heavy off-roading (frequent crashing into rocks) causes lots of minor visible damage and eventually the front suspension breaks, causing massive understeer. Furthermore, passengers riding on the truck bed are especially vulnerable to both gunfire and being thrown off the vehicle in an event of a rollover.

The Dubsta 6X6 can withstand a great amount of water depth; it can go as deep as its grille badge before the engine cuts off.

Official screenshot of the Dubsta 6x6 in GTA Online. Note the passenger clipping through the rollbar. 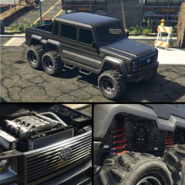 The Dubsta 6x6 on the updated Rockstar Games Social Club.

A green Dubsta 6x6 shown in an ad for GTA+, note the unused livery.