GTA Wiki
Register
Don't have an account?
Sign In
Advertisement
in: Vehicles, Vehicles in GTA V, SUVs,
and 5 more
English

The Dubsta features classic European styling and features many elements that bear strong resemblance to a Mercedes-Benz G-Class 463. The overall styling is very boxy, putting emphasis on its off-road purpose in favour of appearance.

At the base of the front, a large plastic front bumper, spanning the entire width is visible. Above this bumper, a main, chrome-trimmed central grille is positioned on an elevated area of the front. There are rectangular turn indicator lamp units on either side of the grille, whose lower edge is in line with the bottom of the vent for the grille. Above the turn indicators, the main headlamp units are larger and also rectangular. The headlamp units have upper edges that are in line with the top of the main grille. The front quarter areas are almost entirely covered by very wide wheel arch flaring, adding to the muscular appearance of the vehicle. The bonnet/hood features an elevated area similar to both vehicles that it is based on. The windscreen also begins at a height higher than the base of the A pillar, like both of its inspirations.

The sides continue the utilitarian and rugged theme, featuring straight lines for the main body line and edges for greenhouse windows. The line that separates the side of the body from the roof is also completely straight. At the base of the A pillars, the car features what appear to be large, plastic rear-view mirrors. The rear wheel arches are similar in appearance to the front, but are less elevated from the body. The car also has Light Smoke window tint by default.[1]

The rear of the car denotes its simple design, with a flat end and a rear bumper spanning the entire width. A set of vertical rectangle tail lamps can be seen on either side, where the inner halves are placed directly over the rear compartment and the outer ones onto the body. A black license plate holder can be seen on the passenger side.

The interior of the car is similar to that of SUVs like the Cavalcade and the Granger. In the enhanced version, the vehicles uses the same yellow dial set as the aforementioned vehicles.

The primary colour of the vehicle is applied on the bodywork and the interior stitching, while the secondary colour is applied on the front bumper, arches, the bottom of either side, and the roof. Its wheels appear to be a derivative of the "Benefactor" SUV wheels available at Los Santos Customs, but having a concave shape on the centre, and using high-profile tyres. While the rims themselves cannot be painted due to the permanent chrome finish, the pearlescent colour gives the rims a slight tint/shade on it.

The Dubsta features good ground clearance, such that its axles and differential can be viewed from a slightly high angle. The SUV features a high displacement engine, presumably a V12 engine based on the badge on the back, but the cover looks like a V8. This is sent through a permanent four wheel drive system, and then finally through large, high-profile tyres to the ground. The Dubsta is one of the most capable off-roading SUV's in the game, since it has the ability to climb over rocks and make it up steep mountains without getting damaged at all and without hesitation, as its V12 supplies an excellent amount of torque.

This SUV sadly suffers from massive body roll both on-road and off-road due to its narrowness. Going over bumps or small debris at high speeds may flip the vehicle entirely. Giving the Dubsta off-road wheels is a viable method to alleviate this setback, fortunately.

Its heavy weight can be useful when ramming other cars or pushing them. By feathering the throttle, it is possible to push a medium weight car with ease. The V12 engine, if untuned, will struggle against the weight and thus it cannot attain high speeds, and has average acceleration.

Installing the "Spare Wheel" modification for the normal Dubsta will increase its traction slightly, in the same way as a spoiler.

A red Dubsta in the original version of GTA V. (Rear quarter view).

The Dubsta on the updated Rockstar Games Social Club.

The Dubsta2 on Grand Theft Auto Online Rockstar Games Social Club, which was incorrectly used as the cinematic preview image of the Dubsta.

The Dubsta2 on the updated Rockstar Games Social Club.

The Dubsta2 in the cinematic preview on the Grand Theft Auto V Rockstar Games Social Club.

The Dubsta2 in the cinematic preview on the Grand Theft Auto Online Rockstar Games Social Club.

There is a modified version of the Dubsta which features the same design as the regular Dubsta, but all of the trim and chrome details have been blacked-out and also features more shallow roof indentations. The vehicle is set to spawn with various extras that are also available as modifications for the normal Dubsta, being a Black Bullbar, Black Rear Guard, Black Grille, Spare Tire and Black Side Steps. The car also has an unknown window tint applied by default.[2] The design details of this variant seem to be inspired by the Mercedes-Benz G Class models modified by the aftermarket tuning company Brabus.

Unlike the normal Dubsta, this variant is set to spawn in a single colour, with the interior stitching being a permanent white colour. Its spare wheel extra is set towards the driver side (rather than centered to the vehicle) and its wheels are similar to the "VIP" SUV wheels with a permanent black colour, rounded separations on the spokes, and low-profile tyres. Like the regular Dubsta, the pearlescent colour affects the rims, albeit only on the outer surrounding.

In the enhanced version of GTA V, this variant can spawn in two different heavily customized forms, painted in either Chrome, or Brushed Gold with Race Yellow pearlscent. 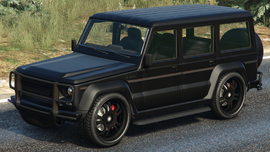 A blacked-out variant of the Dubsta known as Dubsta2. (Rear quarter view). 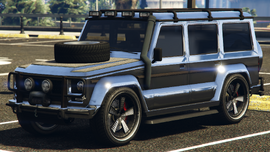 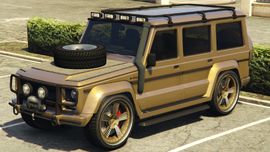 Scenarios (enhanced version; Dubsta2)
The Dubsta2 is part of the vehiclemodelset "LS_CUSTOMS_MODDED_SP". This allows pre-modified Dubsta2s, among many other modified cars to spawn outside Los Santos Customs, as well at other locations.

Scenarios (enhanced version; Dubsta2)
The Dubsta2 is part of the vehiclemodelset "LS_CUSTOMS_MODDED_MP". This allows heavily modified Dubsta2s, among many other modified cars to spawn outside Los Santos Customs, however, unlike the other members of this group, they will not spawn unless another "seed" Dubsta2 is present in the session.