Chris D'Elia
“Thanks for this, man. As you can see, I could've driven no problem, but joykiller back there had to lay a guilt trip on me.”
— Drunk Driver

The Drunk Driver is a minor character in Grand Theft Auto V that appears in the Random Event - Drunk Driver 1.

Not much is known about the drunk driver, but during the ride to his house, he mentions a Thanksgiving Day in which he also got drunk, and claims he ended up sexually attacking the turkey while shouting: "You like my wish bone, don't cha?".

The drunk driver can be found in the parking lot of the La Spada restaurant in La Puerta, discussing with another drunk friend who doesn't want him to drive drunk to his house.

His house is in Alta Place in Hawick, he also asks the protagonist to not drive too fast or he will throw up. Along the way, the drunk driver keeps complaining about his other friend (who he keeps referring as a "buzzkill") and how the friend became an asshole after getting married, and talked a lot about his baby at the last party. The drunk driver will keep shouting and even singing during the rest of the ride.

If the protagonist drives too fast, the drunk driver will open the window and throw up in the street, this also starts a new dialogue in with he says that he has some Cluckin' Bell left in his house and will probably eat it when he gets home. 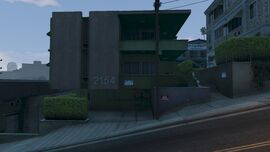