Man: "You have, like, the best tits in the whole world. If I didn't have to work for a living, I would just play with them all day."
Woman: "Oh, you so bad! Ooh, that tickles. Papi!"
―Drunk Couple

The Drunk Couple are two minor characters in Grand Theft Auto V, that appear in the random event Drunk Driver 2.

Not much is known about the couple. The man mentions that it's the little lady's birthday and that they need a ride to their motel so they can celebrate with a party. Their physical appearance is randomized.

The couple can be found near the Sandy Shores Medical Center in Sandy Shores, drunk. The man asks the protagonist to give both of then a ride to The Motor Motel off Route 68, where they are hosted. Take their car that is parked nearby, and go to the motel. If playing as Trevor, the player can deliver them to the Altruist Cult. During the drive, the man will start to flirt with the woman and they will proceed to have sex in the back seat. Depending on which protagonist the player is using, the dialogue will vary between the following:

Michael: "Wow, what the hell is this shit? Just keep it in your pants until we get there, tiger."
Woman: "Stop, honey. The man is getting pissed off."
Man: "Sorry, dude. I forgot that I wasn't in a cab."
—During the ride

Trevor: "Hey, what are you crazy kids doing back there? I tell you what... while you're sweeping the front porch, why don't I work on her back plumbing?"
Man: "Huh? What did you say?"
Trevor: "How about I suck those kidney stones right out of your balls, big guy? Get this party really started."
Man: "Wow. Wow, okay. Man, it's cool, it's cool. We'll stop."
—During the ride

After delivering the couple to the motel, they will give the protagonist $40 and walk into the hotel, with the man claiming that the couple have "unfinished business" to attend to. At this point, the player regains control and each of the protagonists will make a different comment about the car and its unpleasant smell:

If Trevor chooses to deliver them to the Altruists cult, he'll get $2000 for the pair. As Trevor takes them towards the camp, the couple will comment:

As Trevor is heading up the final road to the camp, they'll have this conversation: 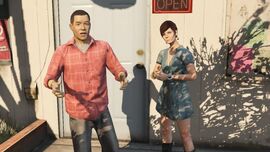 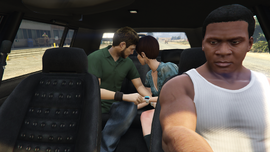 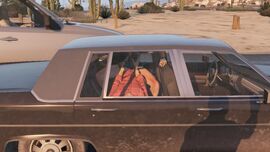 The Drunk Couple having sex in the car.