GTA Wiki
Register
Don't have an account?
Sign In
Advertisement
in: Missions, Missions in The Ballad of Gay Tony, Side Missions
English

In-game time
Drug Wars is a side mission in The Ballad of Gay Tony.

In these side missions, Luis Lopez helps his friends, Armando Torres and Henrique Bardas, in building up their drug empire by stealing it from other drug gangs in a variety of ways.

Similar to TLAD's Gang Warfare, Drug Wars is introduced to Luis by Armando after completing the mission "Corner Kids". Their starting locations are marked on the map by pill icons. They become progressively more difficult, but the money earned increases as well. Every 10 Drug Wars completed gives the player a weapon in Luis Lopez' Northwood Apartment. Completing 25 Drug Wars will raise the player's completion percentage and also unlock the "Snow Queen" achievement/trophy.

The Drug Wars are infinite - even after completing 50 of them, the players can still play the missions; this was likely done by Rockstar to provide players with a playable activity after the primary story missions and other side-missions, required for completion percentage, are completed, as well as the ability to earn in-game cash for weapons and the like.

The drop-off area will be the same location according to the borough where the mission started:

There are 5 different gangs Luis, Armando and Henrique will attempt to rob. Each of these gangs drive their vehicles with unique paintjobs usually reminiscent of the gang's colors.

Completing Drug Wars will reward Luis with weapons which will spawn at his safehouse.

All missions will involve the gang chasing the player whilst driving to the drop off point. If the player moves too far from the drugs, or the dealers holding the drugs escape, the mission is failed.

Most of the cars seen during the Drug Wars have exclusive paint jobs:

Note that if the player tends to get the vehicles on the spot (not the chasing vehicles) in Stickup and Stash, just drive it after the fight without getting the drug bag, go away, and the mission will fail while the player is still on the vehicles. 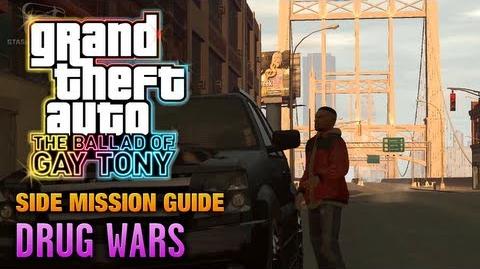